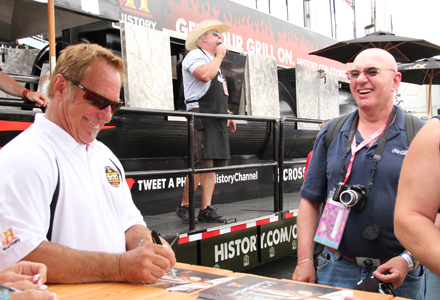 A&E network History is on the road this summer with its first Cross Country Cookout, a nine-city tour of American festivals featuring the Ultimate Smoker and Grill truck. A barbeque chef helms the truck, which can cook up to 2,000 pounds of BBQ at once.

The network and some of its biggest stars hit the road on May 26 at the History 300 Fan Zone at Charlotte Motor Speedway in North Carolina, continued to CMA Music Festival in Nashville, TN; the National Capital BBQ Battle in Washington, DC; Union Square Park in New York City and, most recently, over the weekend of July 8, the Rose Bowl Flea Market in Pasadena, CA. The rest of the trip sees the grill at San Diego Comic-Con, the Pawn Stars Cookout at Gold and Silver Pawn Shop in Las Vegas and Cheyenne Frontier Days in Cheyenne, WY before wrapping Aug. 5 to 10 at Sturgis Motorcycle Rally in Sturgis, SD. At the stops, stars from History’s “American Pickers,” “American Restoration,” “Pawn Stars” and “Swamp People” join the crowds to nosh locally sourced home-made sausage, brisket, beef tips or dry and wet pork ribs.

The whole concept surrounds the idea of the backyard barbeque, which History considers a uniquely American type of gathering. History also wants viewers and fans to think of the network as a brand that goes beyond the screen and represents the best that America has to offer. “We’re about men and women working hard to live the American dream and being successful at it,” Chris Meador, vp-consumer marketing at History, told Buzz.

At each stop, attendees can work off their food-comas at bocce ball courts, interactive games and during opportunities to meet the stars. They also can put put some money down at History’s Cookout Shop to bring home some gear to remember their experience once they wash the bbq sauce off of their faces. Online, the tour has a dedicated FourSquare location so fans can check in to win badges, and feed on Twitter at #CrossCountryCookout.

“From a brand standpoint, we feel like we connect with the spirit and history of America and to us, nothing taps into that better than a good old American barbecue,” Meador said. “[Cross Country Cookout] becomes a backyard barbecue and a way we can make some history ourselves across the country.” Agency: Civic Entertainment Group, New York City