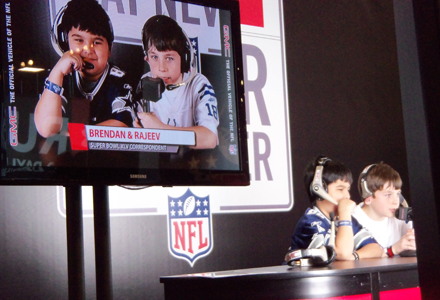 GMC, the official vehicle of the NFL, tapped into the excitement around this year’s Super Bowl to expose its full line of vehicles to fans through engaging experiences at both the pre-game NFL Experience fan festival and on game day at Cowboys Stadium in Dallas.

At the brand’s 150-foot by 20-foot NFL Experience activation, fans not only chatted with product specialists and checked out vehicles on display, they also participated in the You Call the Play video activation that allowed them to call one of four NFL “Never Say Never” moments of the year. Once on stage, they put on their sportscaster headphones and stepped up to a microphone in front of a camera. Then, a pre-recording of sportscaster Phil Simms kicked off the announcement and then shot it over to the fan that then called the play by following a script on a teleprompter. The videos were instantly emailed to the consumers to pass along online. Fans were also treated to player appearances every hour.

Outside the stadium on game day on Feb. 6, GMC set up a 150-foot by 75-foot experience with signage and vehicles on display, and also collected consumer data in exchange for a branded photo with popular sportscasters and the stadium in the backdrop.

“As the official vehicle of the NFL, GMC leveraged the Super Bowl to engage these fans with our products in a no-pressure atmosphere,” Chris Hornberger, GMC national sales promotion manager, told Buzz. “It was an opportunity for us to expose these NFL fans to our great hybrids and new crossovers, because even though Dallas is a great truck market for GMC, we have a lot more than ‘big’ trucks to offer.” Agency: Intersport, Chicago.