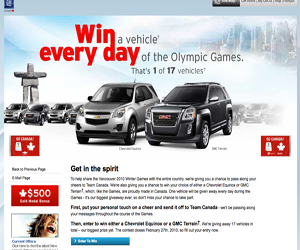 General Motors Canada is using the Winter Olympics to show off its full fleet, promote the upcoming launch of the eco-friendly Volt and drive leads.

The automotive sponsor (associated with the Games since 1976) is using a combination of mass blitz and targeted touches to both blanket Vancouver and drive test-drives. The company, which donated some 4,600 vehicles to the Games (a mix of fuel-efficient makes and alternative fuel models), was instantly ubiquitous on the streets of Vancouver—there seemed to be more GM vehicles at the airport than there were taxis.

But the activation goes beyond vehicle donations. GM is going for a big green rub-off at the Games, attaching to the eco-friendly Power Smart Village consumer experience outside the corporate office of BC Hydro—Canada’s third-largest utility company—with a demo of its Chevrolet Volt, the all-electric vehicle launching in 2011. GM brand ambassadors and product specialists give demos and answer questions about the Volt and GM’s fuel-efficient and eco-friendly products and services. Members of the media can take a spin in the vehicle.

Elsewhere, GM Canada sponsors Canada’s hockey and alpine ski teams. It continues its three-year Chevrolet Making Dreams Possible program, which supplies coaching grants. And online, the company is using a Twitter push as the anchor of consumer facing and lead-generation activities at the Games. Beginning months ago, consumers could send cheers and good wishes from the website win1of17.gm.ca at dealership kiosks. “We’ve wrapped dealerships with Olympic-themed materials and are handing out Canadian flags,” said GM Canada manager-Olympic partnerships Tom Laurie when EM stopped by the Power Smart Village. “We’re trying to activate this with everything we have.”

The cheers are posted to twitter.com/gmcheers (there’s also an auto-Facebook posting link) and then projected on a 24,000-square-foot building in downtown Vancouver—in real-time. As of day three at the Olympics, more than 75,000 cheers had been submitted. Anybody that sends in a cheer is invited to also enter a sweepstakes dangling a daily vehicle giveaway during the Games, which acts as a data collection machine for GM and its dealers. Agency: MacLaren McCann, Toronto.