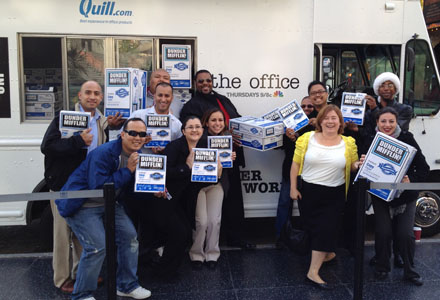 To generate media coverage and social media buzz around its new line of Dunder Mifflin paper, Quill.com from Dec. 13 to 15 distributed free reams of the paper via food trucks in Chicago, New York City and Los Angeles. A Twitter feed, @DMPaperTruck, informed consumers of the giveaway locations.

Dunder Mifflin is the fictional paper company immortalized in NBC Universal’s comedy series “The Office.” Branded reams of the paper bear the Dunder Mifflin logo and slogans from the TV show such as “Limited paper in a paperless world” and “Quabity First.” NBC has licensed its signature paper product exclusively to Quill.com, the online arm of Staples. It also is sold through the NBC online store.
Marketing support for the launch began with an exclusive story in the Wall Street Journal on Nov. 28. Within 24 hours, Dunder Mifflin was a top-10 trending topic on Twitter and number one on Yahoo! To ramp up excitement, Oscar Nunez and Kate Flannery from “The Office” gave media interviews and signed autographs at the NBC Experience Store in New York City. The paper giveaway, which was a takeoff on the tactics Dunder Mifflin itself might employ, engaged fans in high-trafficked locations such as Ogilvy train station in Chicago and New York City’s Union Square.
The program generated millions of media impressions, including 627 tweets and 1,200 followers in three days. More than 6,000 reams of the branded paper were distributed.
“We thought it was really important that we went out very big with the launch,” Aviva Schwartz, director of marketing for consumer acquisition at Quill.com, told Buzz. “There is no better way to connect emotionally with fans of “The Office” than to go to these markets, meet and greet with the fans. We have brought the product to life and wanted to show people Dunder Mifflin paper now is real and it is real on Quill.com.” Agencies: Olson PR, Chicago; Kicking Cow Promotions, St. Louis, MO.
2 ARTICLES LEFT!
Subscribe Today and Get Unlimited Use of the World’s Largest Content Resource on Experiential Marketing