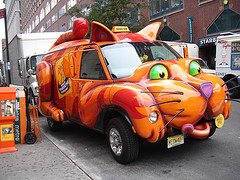 Celebrity appearances are a perennial tactic in the event marketer’s cookbook. But there’s a new winning recipe on the rise: celebrity chefs. Popular Food Network stars like Emeril Lagasse and Rachael Ray have been cooking their way into America’s hearts for years. And cookware brands like All-Clad and Meyer have put these chefs’ signatures all over their products. But it’s not just kitchen brands that are picking up on celebrity chefs’ thunder. Meow Mix threw a celebrity chef into the marketing mix to tout its natural ingredients. Robert Mondavi wines leveraged a chef to pair itself up with food connoisseurs. And Belk department stores invites its star chef to cooking demos to drive its female customers from the shoe department into the housewares department.

Companies are seeking chefs its consumers can relate to and that embody its brand message. “It has to be a symbiotic relationship in terms of their cooking style with the brand ” says Angus Lilly brand manager at Robert Mondavi Private Selection. “We’re looking at trying to have many different levels within events and this is certainly one that fits because celebrity chefs are very popular out there.”

So what are the ingredients to consider when thinking about reserving a celebrity chef for your next event? It depends on the consumer the brand is catering to of course. Check out how Meow Mix Robert Mondavi and Belk fired it up:

MEOW MIX
Meow Mix is no stranger to leveraging the popularity of celebrity chefs at its events. In 2007 it launched the Meow Mix Acatemy a cat-centric school in New York that promised to teach cat parents how to think like their cats. The dean of the school was Food Network’s “Iron Chef America” star Cat Cora. In addition to her first name Cat the chef’s reputation for using the freshest ingredients in her cooking was the reason behind choosing her. The objective was to reinforce the brand’s message that it uses only the freshest ingredients in its cat food.

In November Meow Mix furthered its message on TV with the “Think Like a Cat” game show. The cat-centric show aired on the Game Show Network on Nov. 15. It paired up cat parents and their pets in a format modeled after “Newlywed Game” and “Jeopardy!” Leading up to the premiere Meow Mix threw an orange-carpet event—inspired by its signature color—on Nov. 12. This time it turned to world-recognized chef Wolfgang Puck to cater its event. The tie-in was again to fresh ingredients (Puck is known for cooking with fresh-from-the-farm food). Puck’s catering company served treats inspired by flavors found in Meow Mix like tuna tartar and chicken salad. Drinks included the Meow-tini Tomcat-collins and Catnip.

Both chefs helped Meow Mix get media attention and reach its core consumer which research shows are fans of food channels. “Working with a celebrity chef is very important for the Meow Mix brand because our target consumer over-indexes in watching food channels and being chefs at home ” says Brian Ely marketing director for the Meow Mix brand. “It’s a good fit in terms of talking to our consumer.”

The bonus: Celebrity chefs can add multiple layers to a marketing program like online sweepstakes TV and radio. “Cat Cora not only worked well for the Meow Mix Acatemy but we were able to develop original recipes for the website and send a grand prize sweepstakes winner to cook with her in Napa ” says Ely. (Agency: Grand Central Marketing New York).

ROBERT MONDAVI
Cookbook author Ted Allen has been Robert Mondavi Private Selection’s brand ambassador since the California wine took its winery experience on tour with Crush in the City in 2007. Last summer the brand hit the road again with Discover Wines! and Allen was once again onboard. This time the tour showcased both the Private Selection and the Robert Mondavi Winery portfolios to expose all the brand has to offer to the world of wines. Allen a guest judge on “Top Chef” and “Iron Chef America ” and now host of the newest shows on Food Network “Chopped” and “Food Detectives ” is a face recognized by foodies but also mainstream TV-watchers. He was made popular to the general public as the food and wine specialist on the hit show “Queer Eye for the Straight Guy.”

The goal of the tours is to demystify wine and make it more approachable to the general public. Allen’s easygoing personality embodies  the brand’s message.
“Ted brings a certain style in a very personal and approachable way ” says Lilly. “You have to match up a personality and type of chef that fits with your brand.” On the tour Allen did cooking demos and led seminars on wine. “The seminars and interactive stations were all geared towards education in a fun and enjoyable way that makes it easy to pick up a few new facts about wine and wine making ” says Lilly. The eight-city tour made stops at food and wine events through November (Grand Central Marketing handled).

The relationship between Robert Mondavi wines and Allen lives online at discover-wine.com. New events are posted on the website like Ted Allen’s NYC Dinner. Allen tours Greenwich Village with journalists and pairs up Private Selection with a variety of foods available in the historic New York City neighborhood.

BELK
To reach its 20- to 30-year-old female consumer in the housewares department Belk signed on restaurateur Lorena Garcia who hosts cooking segments on the Spanish language TV networks Telemundo and Univision. Belk’s secondary target is the Latina consumer a strong market in Belk’s southern locations.

“We wanted to partner with a celebrity chef to do more business in housewares particularly in casual dining and entertaining ” says Chris Eliason vp-product development at Belk. “Lorena’s personal style is exactly what we were looking for because it’s casual and colorful and she’s got a lot of energy. It really speaks to the female customer in her 20s and 30s that we’re trying to reach out to.”

Originally meant to stir excitement within the often-austere housewares department Garcia’s persona inspired an entire Belk-exclusive lifestyle brand. To bring the brand to life Belk hosts in-store cooking demos with Garcia whipping it up. The demos get the attention of the media and drive customers from other departments at the store to housewares.

“The demos give us an opportunity to advertise the brand in a way that isn’t price driven ” says Eliason. “It helps to attract a lot of attention to the home department because this target woman is in our department store already. She tends to be in the shoe area and cosmetics and by creating the buzz in the home area it attracts them to that area of the store.” The demos also create excitement among sales associates who have more to chat with the consumer about often resulting in an increase in sales.

Belk tracks the popularity of chef Garcia’s products through its bridal registry. The Lorena Garcia brand registrations are disproportionately high which means Belk is reaching its younger female consumers as planned. To raise awareness of the brand Belk and Garcia attend food and wine festivals as well as charity events where the chef does cooking demos on a Belk-branded stage. These events touch a wide range of people. “It’s not necessarily just talking to people that love buying pots and pans it’s really raising awareness both of her [Garcia] and our store.”