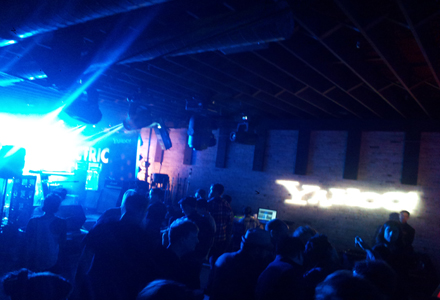 It’s day two for EM here at SXSW and the dogs are barkin’ big-time. Don’t worry though, we’re not slowing down, and there’s still plenty to see.

Last night’s parties were in full swing and of epic proportion. The evening began with a chill 90 minutes thanks to TED@SXSW, a mini-TED session where the TED-sters talked about information as food, and helped us rethink technology design as only for the elite. (Key takeaway: it doesn’t have to be.) After some cool conversations and a quick drink, we headed off to the first party of the night, courtesy of Yahoo! and its partnership with a new Tom Hanks film entitled “Electric City.” And that was also the name of the party, which was in a bunker-like brick club space, with broad, low arches, an enclosed courtyard for fresh air (and smokers) and a big stage where the brand hosted a series of hot, local bands who played all night. Light projections on the walls made sure no one forgot that Yahoo! made the party happen, and staffers on stationary bicycles pedaled to make power for signs and lights all over the space. Electric City, indeed. We had a few drinks and rocked some sweet tunes with Yahoo!, then headed over to local spot Maggie Mae’s, where CNET brought the house down thanks to Austin-based 1980’s new wave cover band, the Spazmatics. Rad, dude. After that, we poured ourselves into a cab and got 40 winks.

Morning dawned hot and sunny on Monday so we took a chance on a free bike rental thanks to HBO and a local bicycle shop. (Now we just have to remember not to keep it overnight, or we’ll have to come up with the $100 overnight rental fee.) We pedaled off to the Foursquare Court for breakfast, where the geo-location social media platform has come back to its launching place and established a chill outdoor space full of free t-shirts, tasty snacks, cold drinks and of course great music.

Before we headed out to the night’s galas, we hung with IFC at the Crossroads House, where partner brand Time Warner was throwing a party to promote a project it is doing with will.i.am that’s designed to help kids 10 to 15 years old become innovators and idea creators. Our last stop was at the Ford Escape Lounge, where the Escape vehicles were on display outside and, inside, the kitchen was getting ready to start pouring the barbecue and booze for all the SXSW folks who wanted to check out the brand’s emerging artist showcase, staged in partnership with Kickkicksnare, a hot music blog.

That’s all for now, but there’ll be more tomorrow, we promise. In the meantime, don’t forget to keep up with us on Twitter @eventmarketer and @atlaswriter and on facebook.com/eventmarketer.