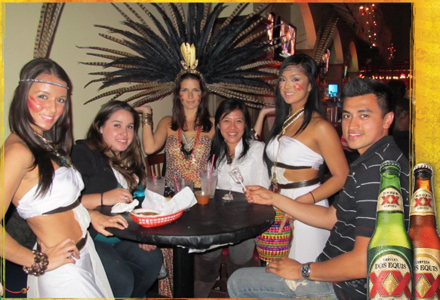 Mexican beer brand Dos Equis hit up bars in 17 markets every night from April 21 to May 5 to show consumers the Lost Art of Celebrating Cinco de Mayo.

Four brand ambassadors dressed up like Aztec dancers and a drummer visited the bars to  perform traditional music and dances, while another held a basket filled with scorpion lollipops and a Mexican-style painted dish filled with edible bugs. They announced to bar patrons that they were calling on the Feast of the Brave, which challenged people to eat the bugs and “invoke their goddess.” The brave bar patrons cued a female “goddess” dancer to begin her performance while the rest of the team passed out beers.

The brand ambassadors captured the activities using Chicago-based e-shots’ Snapshot photo equipment, which automatically sends a fully branded and framed picture to consumers’ emails in real-time. The system also prompted people to publish the photo straight to their Facebook page. Once on their page, consumers were asked to “like” the brand’s fan page and, in lieu of a survey, captured data by pulling down their information right from their Facebook profiles.

“The Feast of the Brave challenge brought an exotic snack of roasted crickets and assorted edible insects along with an ice cold Dos Equis to our consumers, who in turn had pictures posted through social media and spoke about the experience to friends.” Ryan Thompson, brand manager at Dos Equis, told Buzz. “Being able to give our consumers an experience that they may otherwise never get creates a huge amount of word of mouth among our targeted audience.” Agency: Mirrorball, New York City.