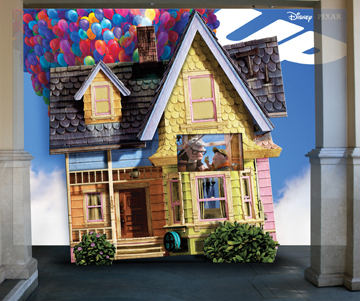 For its May release of the animated movie “Up ” Disney created excitement in the fickle and saturated Los Angeles market by building a full-scale replica of the film’s iconic flying house at The Grove shopping center which boasts about 45 000 daily visitors. Now the house is back just in time to inspire voters before the Academy Awards.

Last May the entertainment giant created an almost life-sized version of the flying house from the movie and planted it in the parking garage that services 95 percent of the mall’s visitors. The three dimensional replica of the house from the film includes an LCD screen which showcases key scenes from the film in three-minute clips on a never-ending loop.

As nominations for the 2010 Academy Awards are coming in the studio has revived the property this month hoping to drive Oscar votes from the same upscale crowd that saw the film. It has been relocated to the front of The Grove’s movie theater to again leverage the thousands in foot traffic during the holiday season.

“The theatrical department at Disney is always looking for ideas to promote its movies both to the viewing public and the Academy ” Brandon Gabriel head of business development and a principal at Midnight Oil Creative which created the house told Buzz on behalf of Disney. “The Grove is one of the few spots in L.A. where you can guarantee that the right demographic will see the house and that is what we needed to assure impressions and meet our goals.”