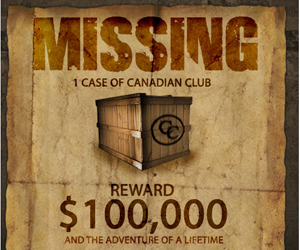 In 1967, Canadian Club Whisky began hiding cases of its whisky around the world and sponsoring hunts in which consumers competed to find them. This year, the brand has resurrected its Hide A Case program to challenge consumers to find one of its 43-year-old lost cases.  The preliminary competition began May 17 and continues until July 9. Competitors of legal drinking age register at hideacase.com and each week they are challenged to solve a puzzle, which, if correct will earn them 10 points and the right to proceed to the next round of competition. To get through the preliminary round, consumers have to rack up at least 50 points from the six weekly puzzles. Those who do, move to round two.

In the second stage, consumers must create and post a video by August 9 illustrating why they should be chosen to join the live expedition to find the case and vie for a chance at winning the $100,000 grand prize. Then, the 30 best videos will go up online for popular voting and before a panel of judges in order to narrow the field down to four Americans and four Canadians.

Finally, in the final showdown next April, those eight adventurers will head off into the wild to compete against one another in a series of scavenger hunts and trivia challenges designed to reveal the location of one of the few remaining hidden caches of whisky. The catch is: not even Canadian Club knows if it’s still there, though three executives know where it is supposed to be. Cases have been found at Mt. Kilimanjaro in Tanzania, Angel Falls in Venezuela, the Swiss Alps, California’s Death Valley and atop a skyscraper in Manhattan. Only 16 of the cases have ever been located, to the brand’s knowledge. If the expedition is unlucky and the case is gone, the winning hunter still gets the prize money. Canadian adventurer and television personality Kevin Brauch will helm the final hunt, wherever it will be.