After Hours At SXSW – Event Marketer 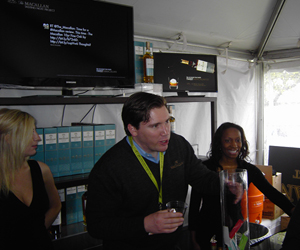 After Hours At SXSW

South by Southwest offers cutting-edge content, warm temperatures and all the barbeque you can eat. But when it comes to partying, this festival takes the cake. On March 16, the night before the music portion of the festival kicked off, The Macallan (makers of single malt scotch whisky) threw a party that mixed sampling with social media. The next day, Sirius Satellite Radio sponsored a VIP barbeque featuring live music by Canadian bands. That same night, and well into the wee hours of the next morning, Virgin Mobile welcomed festival attendees to its very own house party on Eight Street called the Virgin Mobile Freehouse. There’s only one thing left to say, party people: Let’s get it started.

Macallan Scotch
From March 12 to 16, The Macallan and its partner-sponsors Miller Lite, Pepsi and others packed attendees ready to party into a white tent turned rockin’ lounge in Brush Square Park across the street from the Austin Convention Center. From 4 to 7 p.m., partygoers had the opportunity to partake in the Macallan Tasting Note Project. Attendees were provided with a taste of the Sherry Oak 12 Year Scotch Whiskey and Fine Oak 15 Year Scotch Whiskey, and then were encouraged to tweet their opinions and impressions to hashtags #macallan12 and #macallan15. All taste testers were entered to win a private tasting for up to ten friends. Adding extra flavor to the party was Miller Lite, which manned a bar serving up its brew as well as mixed drinks, Monster energy beverages and ice cold Pepsis. Pretzels, nuts and other snacks were peppered throughout the lounge as accompaniments to the drinks and there was a separate massage area to ease the day’s stress away. The place was packed!

Sirius and Sonicbids
By the first day of SXSW’s music festival, some big brand experiences inside the Austin Convention Center had packed up and gone home. Yet outside the convention center, the event kept getting livelier as music blared from every corner of the city. (They don’t call Austin the live music capital of the world for nothing.) Music-centric brands like Sonicbids (online band booking and networking) and Sirius Satellite Radio shined with a sponsorship of the Canadian Blast BBQ & Showcase bash. At the event dedicated to showcasing Canadian music, Sirius broadcasted live and Sonicbids got its logo on the well-received hand fans that helped keep fans cooled down as they rocked out to bands like Hollerado and Born Ruffians. The party was held in Brush Square Park under a white tent scattered with cocktail tables draped in red (perfect for a drink, a bite and chit-chat) and was open to priority guests and badge holders. For the rest of the folks, the music was just as rockin’ from the sidewalks and streets.

Virgin Mobile
Pumping it up into the wee hours of the mornin’ March 17 to 21 was the Virgin Mobile Freehouse, a residential home on Eighth Street which featured live dj sets starting at 8 p.m. each night. To maintain an authentic house party vibe, it operated an open bar inside the garage, placed tables and chairs all over the porch and backyard and hung paper fliers on the picket fence facing the street. Also in true house party fashion, the dj mixed beats from the kitchen while guests battled it out on the dining room dance floor. When EM arrived on opening night (you couldn’t miss the neon sign), the place was jumping. In one room of the house we’ll call the "make-out" room, guests slowed down and watched live footage of performances at Stubb’s bar across the street on large screens and recharged their phones (courtesy of LG). An added bonus was the collection of art pieces by LAND, the Los Angeles Nomadic Division, on the walls in each room. Virgin also had surprise houseguests including actor Bill Murray, John Popper of Blues Traveler, Citizen Cope and pro athlete Rick Thorne.