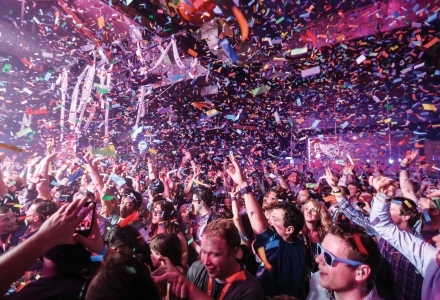 It’s springtime in Austin and that means the South by Southwest Interactive, Film and Music Festival is playing host to the hip, high-tech and influential. Your friends at EM were on the scene, and we’re giving you a little taste of some of the brand activations we loved.

The preeminent television home for speculative fiction is getting ready to release in April its most ambitious offering ever, “Defiance.” It’s a show about a future Earth that has been ravaged by an alien invasion, married to a cross-platform video game with the same plot elements, and many of the same characters. The hook? The two will inform each other, in real time. As events unfold on the show, features and plot twists will affect the game. And, as players of the game change and evolve the world around them, the show will be written to accommodate those changes. Boom! Syfy just blew your mind.

To bring this heady entertainment franchise to life, the brand created the Defiance Container Village, located at San Jacinto and 4th Street, live from March 8 to 11. Inside, guests could play the game, have some refreshments, catch some music and even live there (in one lucky blogger’s case) in a container hotel room, complete with all the amenities. The pop-up hotel had three functioning rooms that featured minimalist industrial design, 24-hour concierge service, round-the-clock security, bathroom and shower facilities and twicedaily maid service. The three people who lived there were “Defiance” cast member Jesse Rath, Jeff Bercovici who covers media and technology for Forbes and Curt Johnson, the blogger who earned his room through a Klout competition where people were challenged with sharing “Defiance” content. The BestMoviesNews writer made 14,000 retweets during the three-day-long competition.

The other highlight of the village was the Need/Want Social Bar. It featured a mobile app that allowed visitors to call out the stuff they wanted (water) or really needed (bacon). The app then aggregated the collective results and posted them to the bar’s interactive wall and the individual attendees’ social feeds. Then, throughout SXSW, Syfy fulfilled several of the Needs and Wants that were posted on Twitter. It was coolest brand activation we saw at South-by this year. Agencies: Sub Rosa, New York City; Social Media Integration: Naked Communications, New York City.

In its second year at SXSW, the online-born insurance provider set out to give the people what they want: help. So, at its footprint on the concourse of the Austin Convention Center—the epicenter of SXSW—the brand asked attendees to answer a few quick questions about why they came to South-by and, from the answers, created a suggested daily schedule for each participant. Once in the system, esurance sent every one of the thousands of people who took part a list of sessions, restaurants, concerts, films and other activities that might interest them.

Each person also got a custom QR code that could be swiped at the booth each day for a chance at one of 20 daily prizes like iPads, Beats by Dre gear and other high-end swag. If a visitor was a winner, the booth, which was designed like a giant dashboard, would open its glove box and smoke would pour out as a tray slid out with the prize on a red velvet pillow. It was all so sweet, it might be the first time anyone was happy to hang with an insurance guy before going to a movie. Agency: GMR Marketing, New Berlin, WI.

One of the highlights of SXSW is the nightlife. To our surprise, one of the hottest tickets for a bar activation was about 30 years old. To drive tune-in for its upcoming new miniseries, “The 80s: The Decade that Made Us,” the National Geographic Channel threw an epic 80’s-themed party on March 10 that featured a celebration of ‘80s music, news and pop culture, headlined by a mash-up music performance artist Gregg Gillis, widely known as Girl Talk. To hype up the party ahead of time, the brand hit the streets of Austin with three iconic vehicles from the decade of radical awesomeness: the General Lee, the “A-Team” van and Doc Brown’s DeLorean from “Back to the Future.” The A-Team van was a private shuttle for designated NatGeo VIPs and the other two vehicles were pure promo tools. Street teams dressed in ‘80s gear supported the vehicles by handing out slap bracelets to drive tune-in and party attendance. Agencies: Party: Mullen, Boston; Vehicle and Street Team: Grand Central Marketing, New York City.

The television home of all things do-it-yourself went all-out for SXSW this year, deploying activations all over the city, including an art exhibition at Austin Music Hall and six “relax and recharge” benches downtown. HGTV is also an official sponsor of “Stages on Sixth,” a four-day music event, and of the BMG Chrysalis Carnival on Rainey Street. This is the second year at SXSW for the network, and the brand set out to go big or go home. The “Art on the Side” exhibition at the Austin Music Hall was a success last year and so the brand brought it back. The idea is to allow festivalgoers to paint mini-murals on a user-generated art wall that will be displayed at the music hall. The wall will also include a custom mural designed by Texas-based hybrid street style artist JM Rizzi. Agency: Track Marketing, New York City.

Shellback Rum is introducing itself to the world with the interactive Shellback Rum Hut, and SXSW is the most recent, and awesome iteration. The activation space featured a boat racing simulation, modeled after the ORACLE Team USA yacht, which will defend the Americas Cup in San Francisco this year, and is sponsored by Shellback. Brand-trained mixologists crafted rum cocktails, of course, while consumers shared stories in the video confessional. Those who participated got a chance at a pair of limited-edition co-branded Shellback boat shoes by Creative Recreation. Agency: Rebel Industries, Los Angeles.