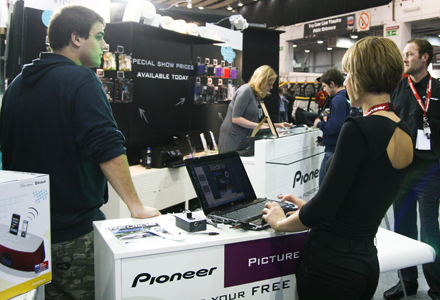 To put its car audio and satellite navigation systems in the hands of its primary target—18- to 35-year-old male drivers—Pioneer’s United Kingdom division has beefed up its marketing efforts with experiential tactics that in six days in November helped generate $25,000 in direct to consumer sales. All of the action happened at the brand’s 620-square-foot booth at the MPH motor show in London featuring talent from the “Top Gear Live” television series (Nov. 4-7), and a 394-square-foot booth at an auto expo in Birmingham (Nov. 11-14).

“Our key demographic is very difficult to reach, so we have had to go to them and connect with them face-to-face in environments they are comfortable in,” Nicolette Minnie, senior marcoms executive at Pioneer, told Buzz.

The brand’s presence at the expos was part of a tour it kicked off in May that visited events rich with its target audience, including football games and car races. During that time, the brand also built up its Facebook page, which helped spread the word about its footprints at MPH with discounted ticket prices and competitions.

At MPH, attendees could interact with the brand at its booth or on the auto gallery floor where it displayed its products inside an Audi with the intention of driving people back to its footprint to learn more about its offerings. The booth experience was divided into three parts. In one area, three cars were decked out with Pioneer sound systems and navigation devices, which people could get in and try out. In the second, attendees could relax in the booth’s lounge equipped with iPod docking stations and headphones for trial (part of the brand’s in-home selections). The third area comprises a retail station where the products were available for purchase with slightly discounted prices and gift-wrapping for Christmas. There were other engagements too, like a stationed van from the summer tour souped up with a massive sound system in the back and additional product demo units that popped up from its sides. Folks could also have a photo taken on-site and superimposed onto the cover of Fast Car magazine, which was then made available on the brand’s Facebook page.

The brand also sponsored an on-site radio station’s podcast, which tracked an average of 200,000 listeners downloading its content each day. Agency: The Circle Agency, Reading, UK.