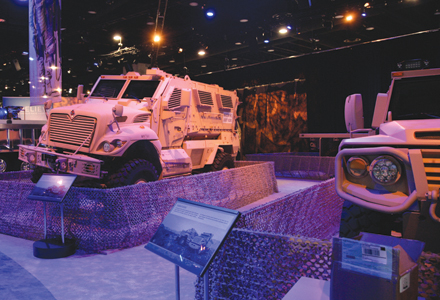 You’d expect a trade show for truckers to be larger than life. After all, the trucks are big, so it takes a lot of space to display them. But this year, Navistar’s 78,000-square-foot space at the Mid-America Trucking Show (MATS), which took place March 22 to 24 in Louisville, KY, was four-to-five times its usual size and the largest footprint of any exhibitor at MATS in its 40-year history.

Truck and engine manufacturer Navistar, which sells its products in the U.S., Canada, Mexico, Latin America and South America, normally highlights its International Trucks at the show, but this year, it rolled in all of its brands—IC Bus, Monaco RV and Navistar Defense, as well as International.

To maximize its investment, Navistar leveraged the space to reach multiple audiences. It brought in its dealer network for a series of meetings that normally take place outside of MATS, held an event for the global media attending the show and sponsored a panel on natural gas, which is a hot-button issue for the industry (Agency: Legacy Marketing Partners, Chicago).

“Trade shows in general in our business are pretty important in the overall marketing mix,” says Mike Cerilli, vp-marketing at Navistar. “A lot of our business is still done face-to-face, so if we can create an experience that brings people together, customers, our dealers, our company management, executives and our sales teams around our product in an immersive way that allows us to highlight the differentiation of our offerings, we’ve got a win-win-win.”

This year, the company pulled out all the stops. With the international media in attendance and Navistar’s global portfolio, as Cerilli says, “the time was right.”

The experience began two days before MATS when Navistar hosted more than 500 dealers for a full day of meetings to discuss new products and business strategy. The following day, it held an analyst meeting covering business dealings and its 2012 portfolio. It invited 100 media from around the world to a meeting with Navistar business units and top executives and held a forum on natural gas headlined by natural gas proponent and investor T. Boone Pickens and other executives that drew an audience of 1,400 dealers, suppliers and media who later visited the Navistar booth.

By the time the show opened, Navistar was in high gear with a super-sized exhibit that showcased its brands and educated the global media, distribution dealers and other attendees about its breadth of product offerings, product integration and strategy. So, this was about a lot more than climbing in and out of the trucks.

One area spotlighted Navistar’s MRAP (Mine Resistant Ambush Protection) vehicle, which is based off its commercial truck platform and sold to the military. Both were displayed side-by-side in an area staged to look off-road. The showcase profiled through multimedia and video the stories of a soldier who drove the MRAP in the theater of battle and a construction worker who uses it in a normal application.

“There is a real emotional connection, as you would guess, among those in the trucking industry and the military,” Cerilli says. “We brought to life how the vehicle delivers the requirements and benefits they need to do their jobs.”

Another section featured a representative from the Wounded Warrior Project, an organization Navistar sponsors that raises money for the returning troops to help them get jobs, healthcare and other support. Attendees also could send an electronic card and welcome home messages to returning troops.
In a more traditional product launch, Navistar utilized 3D projection and multi-media mapping on the back of its new International LoadStar work truck to illustrate a “One Cab, Many Applications” theme and its uses as a dump truck, delivery van, beverage or waste vehicle. The 3D projection also was a highlight during the dealer meeting, along with a performance by The White Stripes rock band. (Follow the link to see a clip of the LoadStar launch: youtube.com/watch?v=nKR4_yZI-Is)

Navistar presented its 185-year history in another area of the booth where it displayed assets such as the International Scout truck and World’s Fair medals dating from the 1800s awarded for its product engineering and design. A multi-media timeline chronicled the company’s role in historical events, such as the construction of the Hoover Dam, in an immersive show floor experience.

In the International Truck brand area, Navistar relaunched Life on the Road, an interactive online forum managed by the truck drivers themselves to share topics of interest such as the best places to park or the best over-the-road music to listen to.

The extra effort paid off. Navistar commissioned a two-part quantitative survey online through Northstar Research, which included a pre-event survey conducted a week prior to MATS and a post-event survey one week after. The survey found Navistar’s experience at MATS had a very positive impact on customers’ sentiment toward International, as nine out of 10 customers said they are more likely to purchase and recommend the brand as a result of the show. Top-of-mind awareness among customers also was very high (77 percent), significantly more than any other truck brand. (The next highest was 10 percent).

“We sold some trucks and furthered relationships, so it was a real success,” Cerrilli says.