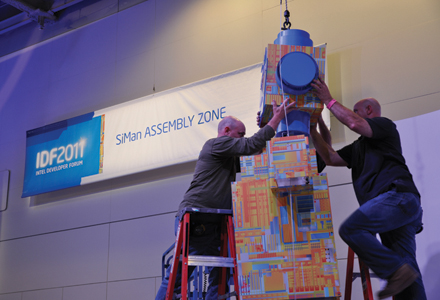 Build it and they will come. That’s the idea behind SiMan, an 18-foot tall, 700-pound glowing behemoth built and decorated by attendees over two days at the Intel Developer Forum (IDF) held this past September in San Francisco’s Moscone Center. It was a simple way to engage and inform attendees about a more complicated concept—intelligent connected solutions and embedded technology that is key to the future of computing. SiMan helped drive the message home.

“Our goal was to convey the message around embedded technology that makes intelligent connected systems possible,” says Len Klebba, event marketing team manager at Intel, which makes the chips and processors used in those devices.

Embedded technology is used in retail kiosks, point-of sale terminals and interactive digital signage; in-vehicle infotainment systems and medical devices; and in industrial, energy and communications infrastructures. “SiMan was a physical representation of that,” Klebba says. “We used the building of it to demonstrate how things are transforming. Once it was built, you could see specific areas that we all relate to and how it is changing our lives.”

Intel held an internal contest to name its giant figure and, taking a cue from “Burning Man,” that behemoth of a bonfire and counter-culture revelry that takes place annually in the Black Rock Desert in northern Nevada, the name SiMan stuck.

The project began the previous June, when Intel met with Chicago-based Live Marketing, which helped put together the messaging and story behind SiMan, and Toronto-based Taylor Group, which created, designed and built out the attachable pieces. Klebba’s team, which includes program manager Cindi Wiggin, handled the event, training and keynote support for the group. Twice-weekly planning meetings and a lot of vision helped pull everything together.

“We knew what our goal was, to create that ‘wow’ factor,” Klebba says. “The communication worked really well, but probably the biggest challenge was for those who don’t visualize things early on, trying to get everybody to see that.”

A professional presenter in the Intel booth theater delivered the intelligent connected systems message on a regular basis and let everyone know they could participate in the story by helping to build SiMan in the “Assembly Zone.” The theater also served as a funnel to drive attendees to booth demo areas. By visiting the demos, attendees received stamps on an activity card, which they redeemed at the Assembly Zone to enter twice-daily prize drawings. Besides the intelligent systems group, other Intel business groups spread the embedded technology message.

During the first two conference days, attendees signed and decorated the embellishment pieces with silver and gold pens and attached them to SiMan’s limbs. Four tables served as art tables and limb holding areas. Beginning at 11:30 a.m. and continuing throughout the second conference day, the limbs were attached to SiMan’s torso on a set schedule. A small crew of artists and ambassadors facilitated the building and decorating process.

The assembly activity culminated at 6:15 p.m. with a “Glow Time” event. Those who had attended the theater presentation and received a blue glow stick returned, stick in hand, for a mass “glow moment.” Attendees from other business units came bearing different colored sticks. SiMan’s 1,500 pre-wired and integrated lights were illuminated and just before he was raised from a sitting position, his arms and legs finally in place, pop singer will.i.am, who also serves as creative director/brand ambassador at Intel, stopped by to sign one of the pieces. In the midst of fog and the colored glow sticks, giant SiMan lifted his body above the crowd of 400 people below.

To engage the techy audience before, during and after the show, a social media campaign generated buzz. Tweets and posts alerted attendees to the building schedule and prize drawings and people received baseball-type trading cards with his stats. Additional posts showcased SiMan in fun and unlikely settings.

“The attendees totally got it, and were excited about seeing it when it was lit up,” Klebba says.

SiMan remained in place until the show’s end the next day. Monitors displayed a rotating montage of images depicting the assembly process and attendees could see themselves participating in connected life by building SiMan.

Who knows where he will pop up next! EM