Answering the Call of Duty for Release - Event Marketer 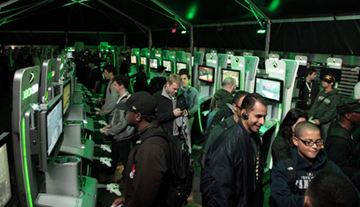 Answering the Call of Duty for Release

On Nov. 9 IGN, Activision, GameStop and Microsoft Xbox 360 leased the entire south end of New York City’s Union Square Park and created a full-scale military experience featuring military vehicles laser light shows perimeter guards and external big-screens featuring live game play. The objective was to create a launch event by which all video game launches in the future would be compared to drive buyers to retail and to win some new gaming fans in the process.

“We knew hardcore gamers would buy the game. The challenge was to tap into the people who were not in the market yet and find an entry point with them ” Paul Chenier New York regional sales manager at ign.com told Buzz. “This was expected to be the biggest entertainment launch of all time and it was important to create excitement around the midnight launch of the game to get as many people out at midnight to purchase the game at GameStop to maximize that first 24 hours of sales. I think it came to about $350 million dollars in revenue.”

The centerpiece of the six-hour event was the 75-foot by 30-foot structure designed as an urban war zone as seen through night vision goggles. It was wired with a dj stage localized network supporting gaming kiosks and overhead video displays with a capacity to handle over 1 000 gamers per hour. For their part IGN and Microsoft set up a kiosk network providing a total of 54 integrated multi-player gaming stations each equipped with 21-foot screens speaker systems and “Modern Warfare 2” Xbox 360 game software. DJ Jazzy Jeff and Questlove of the Roots backed up by several local djs created the battle soundtrack. In the customized VIP area industry leaders and suppliers were treated to top shelf bar service and catering press conferences step and repeat entrances and integrated game stations with flat screen displays. Some of the guests included members of the New York Yankees and New York Giants Method Man Ice T James J. Gandolfini Jr. and Vincent D’Onofrio. All in all more than 2 500 consumers visited the footprint spending an average of 15 minutes each engaging with the game. Agency: UCG Marketing Boston.