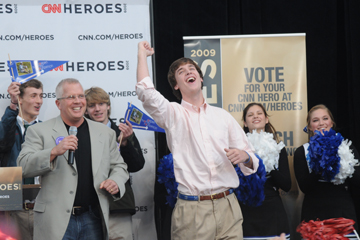 Football wasn’t all that was on TV this Thanksgiving Day. There was the “CNN Heroes: An All-Star Tribute ” too. To promote tune in for the show and encourage online voting for its hero of the year CNN organized grassroots rallies in communities in the U.S. and abroad for two weeks (Nov. 4-17) leading up to the show.

The CNN Heroes tribute spotlights everyday citizens doing extraordinary work in their communities. Ten CNN Hero finalists were picked out of 9 000 submissions from 100 countries. In each of their communities CNN created a pep rally that reflected what each hero was being recognized for. If the hero was doing health related work for instance CNN branded a hospital brought out local organizations the mayor basketball teams volunteers and the community to throw one big party in celebration of that hero. Street teams handed out literature with tune in information and online voting instructions while a feature about the hero and the show looped on plasmas peppered throughout each rally.

“The rallies leveraged each hero’s hometown pride and drove local media coverage which built even more excitement and made people eager to vote for their hero and tune in on Thanksgiving to watch the outcome ” Jennifer Boardman senior director-consumer marketing at CNN told Buzz. “It made sense for us to celebrate them on a local level too because it’s authentic and because the work of our heroes is very grassroots.”