How Canon Turned A Contest Into A Live Portfolio – Event Marketer 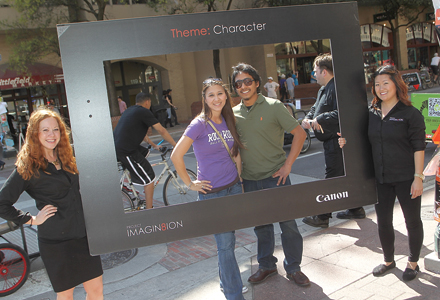 How Canon Turned A Contest Into A Live Portfolio

Canon last November held a red-carpet premiere at New York City’s Museum of Natural History to launch “When You Find Me,” a short film inspired by eight winning photos submitted in an online user-generated contest. During that evening, 600 guests filed through a gallery that showcased each of the more than 96,000 submissions before the film was viewed in the museum’s Samuel J. and Ethel LeFrak Theater. The occasion could have been the culmination of the contest, but like a true premiere, it unleashed a series of live events that continue to shine the spotlight on Canon and the photos.

The contest, called “Project Imagin8ion,” kicked off last spring. From May 22 to June 14, photographers of all levels uploaded photos to Canon’s Long Live Imagination brand channel at youtube.com/imagination. The photos illustrated eight movie themes—setting, time, character, mood, relationship, goal, obstacle and the unknown. Hollywood director Ron Howard, who produced the film, along with Canon experts and the Project Imagin8ion community of Canon users and photography enthusiasts narrowed the submissions to eight photos, one from each category. Howard, his daughter Bryce Dallas Howard, who directed the film, and Freestyle Productions then crafted a story, developed the script and produced the 24-minute film using Canon DSLR products. Grey New York handled creative and digital elements of the campaign; Grey Alliance managed the partnership with Ron Howard and executed the consumer promotion, film premieres and p.r.
The resulting film, “When You Find Me,” is a touching tale of two young women who find peace and reconciliation after dealing with the loss of their mother at a very young age. It is the first Hollywood film inspired by a user-generated photo contest. Even after the contest ended, through the end of last year, consumers could visit the brand’s YouTube channel to view excerpts of the script and interpret them through their photography. Select photos were showcased on the site. A second premiere took place later in November in Los Angeles, where Ron Howard discussed the project with industry peers. The film has been viewed on YouTube thousands of times.

Since then, the film has found new life as the focus of Canon’s sponsorship activations at Sundance and the South by Southwest Film Festival (SXSW). Plans for additional screenings this spring are also in the works. “We’re looking for the best way to bring it to individuals,” says Michelle Fernandez, director-marketing at Canon. “It’s important for us to be able to show the final film in a theater environment, to have people see it on a large screen and feel the inspiration that these photographs have given us.”

At Sundance, Canon on Jan. 26 and 27 showed the film at the Holiday Village Cinema and sponsored talks by professional photographers on using Canon technology in storytelling. A “Frame Your Imagin8ion” sweepstakes offered festival attendees a chance to win a Canon camera using picture frames that they could hold up and shoot through to capture the eight movie themes featured in the Project Imagin8ion contest. They could upload their photos at the Canon booth, a 20-foot by 20-foot space located in the Festival Co-op, the official hub for information and the home of several sponsors, including Yahoo!, Hilton Honors and L’Oréal Paris. One winner was chosen each day of the festival.

Canon distributed flipbooks, one for each of the eight winning photos from Project Imagin8ion, with the winning photo on top followed by stills from the scene in the movie that was inspired by the photo. It also displayed copies of a coffee table book that featured 240 photos from the semi-finalists.

Canon repeated the Frame Your Imagin8ion sweepstakes, the flipbooks and coffee table books at SXSW, where it also sponsored a Canon-branded screening room to show the film. It built private screenings into the festival programming and people who attended could enter to win a Canon camera. The brand also sponsored two locations at SXSW where attendees could upload their sweepstakes entry. Both locations featured a photo gallery showcasing many of the entries in the Project Imagin8ion contest. The company also screened the film online, so that people waiting in lines at the festival could snap a QR code on materials distributed by Canon to view the film from their smartphones.

Canon’s YouTube channel remains the hub for its content and community, but plans to educate, engage and grow that community are in the works. So far, the campaign is the picture of success. The company enjoyed a 19 percent lift in share from the project in 2011, going from a 35 percent to 51 percent share during the second half of the year. Including p.r. and media, it also snapped up 3.4 billion impressions.

“This was a campaign to increase awareness of the Canon instant camera and its ability to take still and moving images,” Fernandez says. “But it is also about inspiring and empowering our consumer with the right tools.”