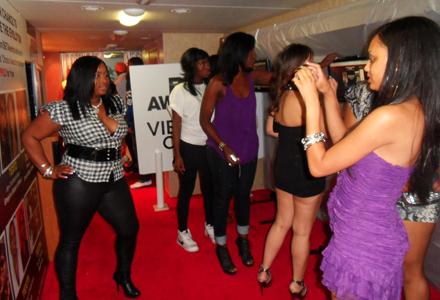 The BET Awards Viewers Choice Mobile Tour hit the road last month to encourage viewers to vote for their favorite music artist, visit BET.com and watch this year’s awards show held June 27. The tour kicked off on June 17 in New York City and wrapped at the awards show in Los Angeles. In between, it made stops in high-trafficked areas, including festivals, concerts and retailers where they handed out tickets to the show.

"The tour complements our on-air, online and mobile campaign with a grassroots effort,” Brucetta Williams, vp-off-channel marketing and promotions at BET, told Buzz. “It makes our audience feel closer to our brand and like they’re part of the show.”

Once on site, the tour staff rolled out the red carpet and put up velvet ropes to create an awards show environment around the branded vehicle. Inside consumers could cast their vote on one of three touch screen voting stations, followed by a mirror station to touch up their hair and make up for a photo at a touch screen photo station. They posed next to the BET award and walked away with a branded souvenir photo with a show tune-in reminder. Before exiting, brand ambassadors asked BET trivia questions about last year’s show for a chance to win a t-shirt.

To drive traffic to the footprint, brand ambassadors on video Segways (running BET content on a loop) handed out tune-in cards and directed folks to the vehicle. Additional buzz was spread with message and photo posts on Facebook and Twitter. Agency: Brand Marketers, New York City.