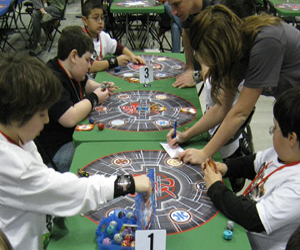 On Feb. 21, loyal Bakugan fans will get a chance to compete in the game’s Baku-Con U.S. Championship tournament in New York City’s Roseland Ballroom. The championship is the culminating event of its 2010 national tour, which started hitting convention centers last month. Bakugan is an action strategy game that’s gaining the kind of popularity Pokémon enjoyed a few years ago. In the game, Bakugan spheres function like marbles, but once they hit their target they transform into monster-like characters.

“Bakugan is very social and interactive by nature, so we felt that it’s hugely important to any marketing campaign we do that we’re actually out interacting with kids,” Donna MacNeil, senior director-retail marketing events and promotions at Spin Master Ltd., told Buzz. “We have been able to identify kids that live and breathe our brand and we’re able to reward them for being such great players and fans.”

The two-phase program started last year when Bakugan traveled cross-country to make sure kids were trained properly on the rules of the game. New this year, it added the competition for kids ages seven to 15; the top two players from each city will be flown out to New York for the finals.

The tour made stops in Chicago, Dallas, Los Angeles and Orlando with cool activities for the whole family, like t-shirt presses, photo opportunities and a beanbag lounge where fans could learn more about Bakugan on looping video. The championship games on the main stage were aired via a giant flat screen with commentators revving up the crowds. Between 700 and 2,000 visitors attended each event.

To reach kids that could not attend the events, Bakugan had its community manager, Lord Darkus, provide event play-by-play on YouTube, Facebook and Twitter. Agency: AMP Agency, Boston, MA.