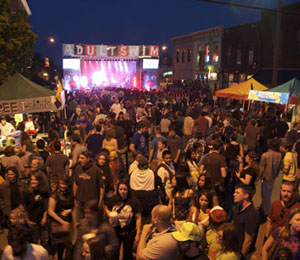 Adult Swim Takes its Tour Strategy from Day to Night

Cartoon Network’s Adult Swim College Carnival Tour this year has evolved from a daytime on-campus event to a multi-night engagement platform. Now in its third year, the tour is hitting nine campuses from April to May, and picks up again June 10 at Bonnaroo in Manchester, TN. Rather than engaging students between classes, the new strategy allows the network to interact with more than 2,000 students each night.

“When it was during the day it was awkward because kids were coming in for a shorter amount of time, instead of having a beer and listening to a band and spending a whole night with us,” Stacy Moscatelli, director-marketing at Adult Swim told Buzz. “We wanted to morph into more of a nighttime party event, rather than asking students to step in and grab a free t-shirt.”

Part of the new strategy involves partnering up with local bars and restaurants already popular with the students to help spread the word. In one case, Adult Swim partnered with Chipotle to give out free burritos on campus and invited students to the evening event, generally held in the parking lot of a local hang out. The network also uses Facebook and Flickr to create buzz.

Marking the entrance to the network’s event space is a 25-foot inflatable version of Carl, a favorite character on the network. Once inside, the vibe is like a church carnival with 12 activity stations, including ring tosses and circus pong. Prizes include branded laptop and phones cases, as well as t-shirts. A customizable silk-screening t-shirt station is also very popular.

At each stop, the network brings in live bands, including The Clips, Fiery Furnaces and Here We Go Magic. TV screens showing clips of new shows are peppered throughout the footprint, which has the potential to be as large as 150 feet by 100 feet, depending on the venue. Agency: BFG Communications, New York City.