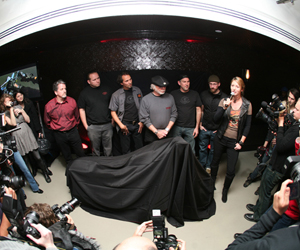 Harley-Davidson in January officially unveiled its new Forty-Eight motorcycle before a crowd of riders, media and chopper enthusiasts in the basement of New York’s hip Ace Hotel. The sneak preview took place one night before the New York Cycle World International Motorcycle Show, which took place Jan. 22 to 24 at the Javits Center. Harley-Davidson dealers attending a dealer meeting in Texas also got in on the action via video footage from the event and a live feed from the Motorcycle Show.

The night’s Back to Basics theme played up the raw, real and rebel appeal of the Forty-Eight, which belongs to Harley’s Dark Custom Line and appeals primarily to 18- to 34-year-old males who are likely into alternative music, art and action sports such as motocross and skateboarding. Svp and chief styling officer Willie G. Davidson, a descendant of one of the founders of the company, accompanied by the team that designed the Forty-Eight, was on hand to pull the sheet off the cycle. In keeping with the theme, cans of Miller High Life and bags of popcorn and peanuts were served against a backdrop of chain-link fences and vintage-bike imagery. A styling team customized gas tanks with freehand art designs. Two additional Dark Custom Harleys also were on display.

“It was about showing the motorcycle in its element, an advance look at the cycle and the art that went into it,” Paul James, director of product communications, told Buzz. “And it gave the dealers a real sense of the excitement, too.” Agency: Mirrorball, New York City.