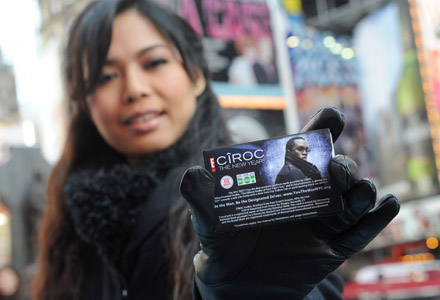 During the month of December, the Big Apple’s Department of Transportation is unleashing brand ambassadors all over the city to hand out free rides in city cabs, buses and on the subway to fight drunk driving. The anti-DUI program is part of the ongoing “You the Man” initiative, which seeks to establish the coolness of being the designated driver. The street campaign launched on Dec. 6 at an event at 46th and Broadway in Manhattan, near Duffy Square in Times Square, with the help of NYC DOT Commissioner Janette Sadik-Khan, Taxi and Limousine Commissioner David Yassky along with representatives from CÎROC Ultra Premium Vodka, which lent its branding and image of spokesman Sean Combs to the gift cards as part of its sponsorship of the “You the Man” initiative. The city will give away thousands of $25 debit cards for the free rides home near popular party neighborhoods on three nights this month.

“By doing this on the street, outside of bars, the street teams can get the time and space to engage with the consumers about the program’s message while handing out the gift cards,” Robin Lester Kenton, asst. dir. of strategy and communications at the NYC DOT, told Buzz. “I’d love to do some similar programs next year.” Agency: Omnigage, Brooklyn, New York.