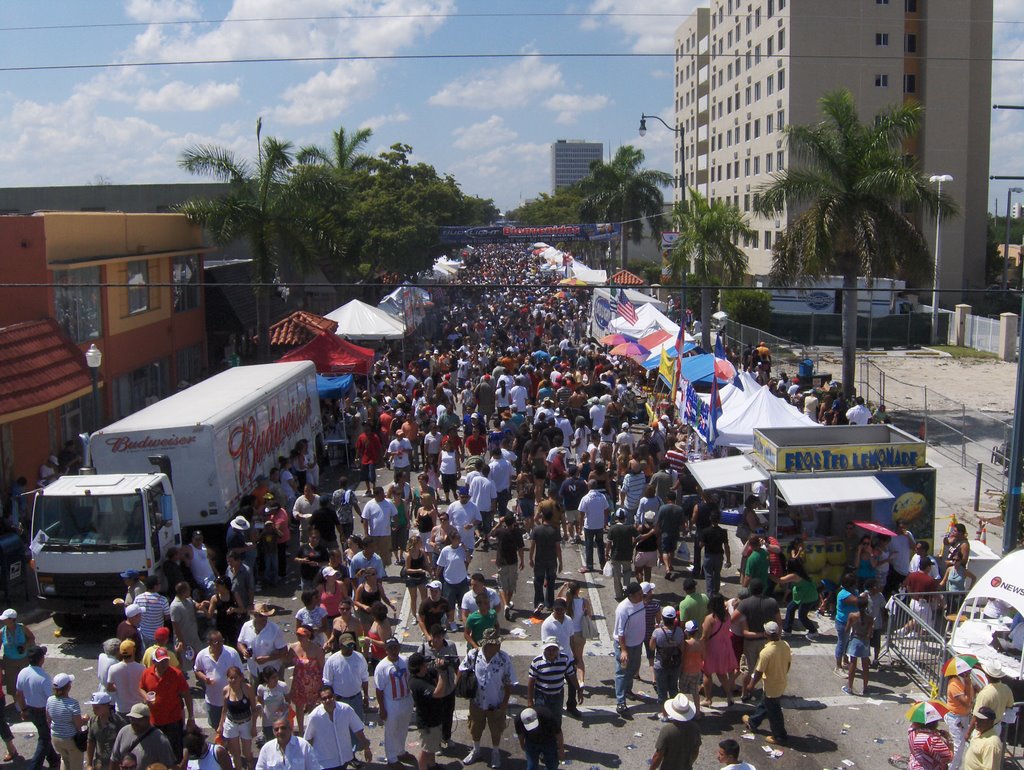 IN LITTLE HAVANA the scene and smells were comfortingly familiar—the aroma of deep-fried foods and cigar smoke wafted Latino rhythms echoed and anti-Fidel signs abounded. Under an unseasonably warm 90-degree sun families sluggishly made their way to Eighth Street where the annual Calle Ocho Cuban festival promised cultural fanfare—and maybe more importantly free stuff from some of the nation’s top brands. For marketers it was the perfect opportunity to reach one of the top Hispanic markets.

Though simple sampling may seem somewhat ho-hum the proof was in the pudding. Entire families lined up for blocks to get their share of freebies in March. Some lines were so long EM suspected more than sampling was up. “Is there a celebrity in there?” we asked. Nope the free stuff was the draw.

There were a handful of brands doing more including a dominos tournament that spoke to the enthusiasm for the game in the community and—oh joy!—wrestling matches. And one brand added a little b-to-b action under a VIP tent.

There were also big names with little ideas which should have paid closer attention to the caliber of brand ambassadors running their tents.

EM survived the scorching sun to bring you a taste of Calle Ocho 2008.

Gotta give it up for Geico. It mixed it up nicely under a green tent with life-sized posters of its gecko icon holding touch screens. The hook was a raffle for a $500 gas card—a perfect way to reel in families concerned about high gas prices. It was also a great opportunity to do some data capture. On the touch screens brand ambassadors guided participants through a series of questions including a data-collect for address and phone number to enter the raffle. Participants then moved on to the second portion of the activation which involved slipping a green rubber ball into openings in a plastic box to win prizes. EM won a black visor sporting the charming gecko on it. There were also hand fans with the gecko’s face on it for the taking—hey on a day like this one we took it where we could get it (Agency: Redpeg Marketing Alexandria VA).

The refreshing gum stuck to its cooling trademark by providing a spraying station as part of its footprint—a godsend in 90-degree heat. People were also given free gum samples and a chance to win tickets to an Enrique Iglesias concert. Nothing too fancy but Dentyne Ice had it covered. The company served the public well by keeping bodies cool and mouths fresh on a steamy day (Agency: The Vidal Partnership New York City).

ESPN gets big kudos not only for showing off its best stuff on event day (with game-day energy) but for sponsoring the annual domino tournament leading up to Calle Ocho at the local Maximo Gomez Domino Park. At the festival ESPN made the dominos connection again by setting up tables where folks could sit and rest and play a game behind the ESPN Desportes En Vivo! display. Inside it offered virtual football and soccer races. For football participants stepped on foot controller pads in front of a virtual screen to run to the goal line. For soccer participants competed by screaming the word “goal” the loudest to advance players along the field. Prizes included official soccer jerseys from Mexico Cuba the U.S. and other teams. ESPN captured data by having consumers register to receive a game card that gave them access to the virtual races and kept tally of their scores. Babes dressed in skimpy referee outfits passed out info about ESPN outside and drove consumers inside for a trivia game. Comcast Miami the local sponsor teamed up with ESPN by setting up a table with giveaways and information about its services behind the pop-up (Agency: LatinSphere Long Beach CA).

At Calle Ocho there just aren’t too many places to sit. Restaurants and cafes close up instead setting up tents with festival fare. You’re on your feet most of the day. After hours of hoofing it EM spotted an oasis—comfortable seating under a tent with no lines. The setting was serene as people sat silently listening to tips from a make-up artist as she dabbed eye shadow onto an audience member’s face. Our tired feet had Maybelline and Garnier to thank for this respite. The two beauty brands stopped at the festival as part of its Great Beauty Tour which featured seminars by make-up artist and skincare expert Chuck Hezekiah. Consumers got personalized consultations and received samples and coupons. The crowd stuck around for a while (so did we) for the make-up seminars. (Or maybe just to catch their breath but hey either way they were listening.) The brands created a very comfortable and inviting area where people could learn about its products (Agency: EventNet Ft. Lauderdale FL).

Coca Cola’s energy drink Full Throttle Blue Demon was a natural fit at Calle Ocho. The blue agave-flavored drink which is packaged in bilingual cans pulled in a huge crowd with a chance to meet Lucha Libre (it’s a Mexican version of wrestling) legend the Blue Demon Jr. On a fully branded stage Blue Demon Jr. faced off against the Monstruo Toro Rojo and the Temptress. (What’s wrestling without some high-energy estrogen?) During the matches brand ambassadors gave out samples of the energy drink and branded merchandise. Before the event Full Throttle spread the word at local Home Depot stores through sales promotions as well as on the local radio station La Raza 106.3 FM (Agency: ADN Communications Coral Gables FL).

Old Spice painted Calle Ocho red with branded caps tablecloths and banners for the Old Spice Domino Tournament. The brand that’s given uncles and grandpas their signature spicy smell tapped into the domino-playing tradition in the Hispanic community by teaming up with the USA Domino Federation. Folks registered online at vivodomino.com a bilingual website or on event day. They were provided with Old Spice gift bags and a chance to win cash. There were 70 tables with four people playing four matches total. The tournament was played in pairs so there were a total of 280 players. The tournament was held from noon to 5 p.m. with a promise of a $25 000 prize to be split in two game categories double six and double nine. The grand prize for each category was $5 000 per team. In an effort to engage the younger crowd too Old Spice reached out to local schools to sign kids up for the tournament (Agency: PainePR Los Angeles CA).

Who doesn’t love a tangy thirst quencher like lemonade—and a soothing toothpaste? It might seem like an unlikely pair but in actuality the two are perfectly complementary. Outside its Dental Health Spa a brand ambassador gave out samples of Sensodyne and Sensodyne ProNamel as well as icy cold and acidic lemonade to remind consumers of potential food triggers and how its brand can help alleviate the pain. While on line inside for a free shiatsu chair massage and a consultation with a hygienist folks were treated to interactive plasmas with educational info about the toothpaste. After the consultation the consumer received a gift bag with samples and coupons. Playing on its hot and cold theme brand ambassadors encouraged consumers to sign up to win a trip to Switzerland (cold) or the Mexican Riviera (hot) which served to capture data (Agency: emg3 Event Marketing Group Portland ME).

It’s safe to say that Kraft was the sampling king at a fest where you couldn’t turn around without getting something shoved in your hand (EM’s pockets were brimming with miniature Snickers). Though a bit secluded from the heart of the parade Kraft set up an entire corner for its products in the Calle Ocho Kidz Zone sponsored by Winn-Dixie—a smart move since they were giving out some of kids’ favorite stuff. All day long families flocked to this area for handfuls of Chips Ahoy cookies Ritz crackers Capri Sun—you name it. The Oscar Meyer Weinermobile was parked right out front. Kraft also set up a branded stage with live dancers. The lines were as long in the afternoon as they were in the morning.

Adjacent to one of Little Havana’s top restaurants Casa Juancho a little b-to-b action was unfolding under a white VIP tent. What a sweet scene: an ice sculpture shaved into a bar loaded with Cointreau a tiki-hut bar where Mount Gay Mojitos were served and an art deco bar for Grouse whiskey. The floor was dotted with white plush seats an outdoor café was set up with tables draped in white linen and a bonafide cigar roller visited the guests as they relaxed. Guests could enjoy free drinks live music and the most perfect paella provided by Casa Juancho. The Florida-based Republic National Distributing Company a distributor for all three brands organized the chic party.

The little carmaker that could KIA a brand known for quality and affordability gave festival goers a chance to shake hands with a basketball star. Glen Rice a former Miami Heat player was on hand to sign autographs for a long line of basketball fans near a KIA car display. KIA lured other folks in with live music and sexy dancers that posed for pictures as passersby came near. KIA also handed out those ubiquitous hand fans.