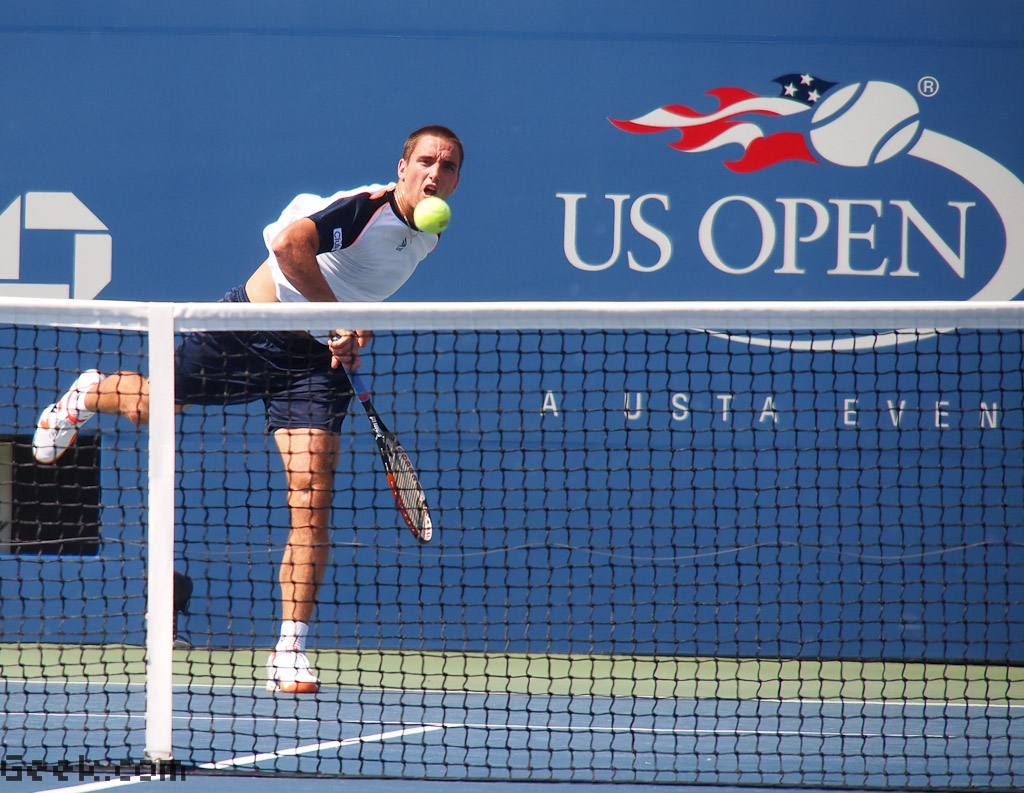 A whopping 715 587 people attended the 2007 US Open from Aug. 27 to Sept. 9 in Flushing Meadows New York making it the most highly attended contiguous annual event in the world. (Yes the Olympics are bigger but they’re not annual.) It also made it the perfect place for Olympus to push the envelope with a multi-faceted experience-based campaign that touched consumers prosumers (expert amateurs) and professional photographers. Olympus leveraged the fifth year of its six-year US Open sponsorship with a variety of activations at the US Open and the US Open Series—tournaments that took place at locations across the country for the five weeks leading up to the Open. It all focused on immersing the tennis fan in everything Olympus.

The mantra that held it all together: Get the cameras in people’s hands. “Technical specs don’t create consumer behavior ” says John DeMayo vp-operations at Olympus who oversaw the sponsorship this year. “By giving out thousands of cameras we’re creating a very powerful dynamic and an effective brand message.” The icing on the cake was exposure everywhere including online activation hospitality and a variety of different consumer promotions. Everywhere tennis fans went Olympus was there. Here’s a look at how it all came together:

Olympus’ strategy for getting cameras in the hands of tennis fans was realized in the Capture the Action photo contest. Any attendee on-site was allowed to borrow Olympus’ new Stylus 770SW camera for two hours at eight of the US Open Series events and all 14 days of the US Open in New York City. They were free to wander the tennis center taking pictures and afterward they could enter their favorite picture (that embodied a love of tennis) in a contest. Every day the best picture as decided by a panel of judges took home a 770. A grand-prize winner got an E510 Digital SLR Olympus’ higher end camera. Every participant was able to keep their photo card after they returned the camera and received a gift from Olympus. “In the camera category it’s all about touch and experience ” says DeMayo. “You’ve got Olympus representatives teaching people how to use it; that goes a long way.”

For those who fell in love at first touch the 770 and a variety of other Olympus cameras binoculars and digital voice recorders were available for sale at the pop-up store that accompanied the booth. Olympus technical representatives conducted hands-on demonstrations of the Olympus products including its high-end digital SLR cameras and lenses. Over $108 000 in sales was conducted on-site.

Another connection point was the branded Olympus PhotoCart which extended the Olympus footprint throughout the Series tournament grounds and allowed consumers to see the Olympus E510 camera in action. Attendees got their pictures taken at iconic spots at each event location. Then they received a card they could bring to the Olympus booth to retrieve a copy of the picture. Or they visited getolympus.com punched in the number at the bottom of their card and downloaded their image from the site. The PhotoCart drove both display and web traffic and also served as a secondary product demonstration point since participants were given an overview of the Olympus E510 by brand ambassadors during the photo experience.

Event attendees weren’t the only ones targeted at the Open. Olympus also had its eye on a more elusive group—the 400 professional photographers on hand to cover the event. It took a different if related approach to start the conversation with professionals. The key to tapping into their interests was still getting cameras in their hands but Olympus achieved the goal first by branding the photo pit—the spot from where professional photographers cover the action. Step two was the Olympus Professional Photo Lounge and Service Center where Olympus built credibility through its technical representatives who were on hand offering “clean and check” services as well as providing loaner equipment. Olympus made its highest-end professional series of cameras and lenses available to accredited photographers. “Those professionals are tough to get to but this creates a connection ” says Steve Woods ceo at handling shop emg3 in Portland ME. “It creates awareness. So for many they see Olympus they understand Olympus.”

In the ultimate hands-on experience Olympus arranged for select fans and consumers to access the courtside Olympus Photo Pit with Olympus’ E510 in hand for an opportunity to shoot with the pros. Olympus was also granted access to the Arthur Ashe Stadium rooftop which overlooks the main court on one side and the entire New York skyline on the other to participate in the Olympus Fantasy Photo experience.

Participants were selected based on their interest in Olympus products at the main display or because they were spotted at the event using an Olympus camera.

VIPs sweepstakes winners and valued customers were also hosted in the Olympus VIP suite which overlooked the main court at Arthur Ashe stadium.
It all added up to a 360-degree activation that put the Olympus brand in front of attendees all over the stadium grounds.

In addition to the hands-on approach Olympus flooded the arenas with signage and special events including Olympus Day at the US Open and Arthur Ashe Kids Day which included three pros Amer Delic Ashley Harkleroad and rising star John Isner signing autographs and instructing kids on how to serve and hit overhand as they competed for Olympus prizes.

John Isner also signed autographs in the Olympus booth during the Open. “What we were hyping on the Olympus side is the speed and performance of Olympus cameras so the fastest serving guy in the Open as far as consistent serving was John Isner and that same speed and precision is part of photography ” says Wood.

As Roger Federer and Justine Henin held their trophies overhead Olympus was doing its own celebrating. The company doubled the value of the US Open sponsorship without increasing spending. The overall program included 8 US Open Series events and the 14-day US Open tournament which yielded 988 Olympus photo contestant participations 24 755 hands-on product demonstrations 1 364 404 “live” signage impressions and $108 485.63 in gross product sales.

“We had a real repositioning this year and a whole different team managing the US Open series ” says DeMayo. “So it was a lot of decisions and I think we did a good job. But now that we’ve got a baseline the sky is the limit. There are a lot of things we can capitalize on. I’m looking forward to 2008 even though 2007 was a good year.”