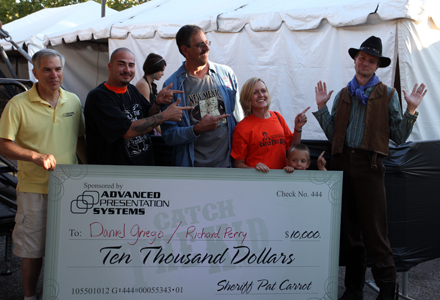 “We wanted get New Mexicans to vacation in-state,” Martín Leger, advertising manager at the New Mexico Tourism Department, told Buzz. “Ten clues were stationed all around the state and so people had to travel to get there and you couldn’t get those clues any other way.”

Beginning July 14, participants could go online to catchthekid.com, create a profile and download an app that would deliver clues for various locations around the state. Once participants arrived at a location, they activated the app on their smartphones and scanned a program banner at the planned destination. Once they uploaded that information the next clue was revealed. Non-smartphone users could also participate by taking a picture next to life-size Billy the Kid banners at each location. They uploaded the photo to the website and were also given the next clue. To spice up the challenge, people had to download a warrant for the Kid’s arrest, which was available three weeks prior to the release of the date and location where Billy could be found. Other incentives to keep playing the game included a weekly prize for travel packages, like two-night lodging and meal giveaways.

Billy the Kid was finally “caught” on Sept. 24 at the New Mexico State Fair after a summer-long warrant out for his arrest. After a mob gathered around Billy at the Fair, two people nabbed him simultaneously and agreed to split the reward. Agency: M&C SAATCHI, Santa Monica, CA.