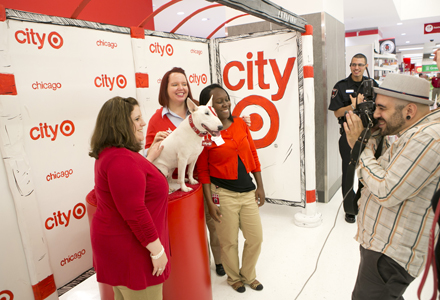 To promote the July 25 grand opening of Chicago’s new CityTarget, the retailer created a series of experiential activations that engaged consumers and excited them about the new store. The store is one of five smaller-scale “urban” Targets slated to launch this year in Los Angeles, San Francisco and Seattle. The new stores are about two-thirds the size of Target stores typically located in suburban areas and offer home goods, apparel, beauty supplies and grocery products that appeal to young, trendy city dwellers.

“Target set out to establish the Chicago CityTarget as a destination that enhances the way people live, work and play in an authentic, meaningful and local way,” Dan Griffis, director-Target Events Marketing, told Buzz. “To achieve this, we created a series of events and experiences that helped launch the CityTarget brand while generating excitement around the store and what it will offer to commuters, tourists and urban dwellers in downtown Chicago.”

In the months leading up to the store’s opening, Target activated events to build excitement, drive awareness and give consumers a taste of what to expect when the State Street store opened its doors. Among the happenings: alfresco spinning classes at Millennium Park on Target-branded spin bikes set to a live dj with the backdrop of the Chicago skyline; a branded pop-up coffee shop in Riverside Plaza, which distributed Archer Farms coffee samples in CityTarget cups to morning commuters; a Target “Go Tube” mobile shop on North Avenue beach offering beach-related products for a day in the sun; a day of Target-branded kite decorating and flying in Millennium Park. The grand opening featured the Chicago Bucket Boys performing on CityTarget-branded buckets, destination bars themed like Chicao El stops and a photo booth with the Target dog.

“We were looking for a way to connect with guests in a tangible, face-to-face way and convey our excitement about opening a new store in the heart of downtown Chicago,” said Griffis. Agency: agencyEA, Chicago