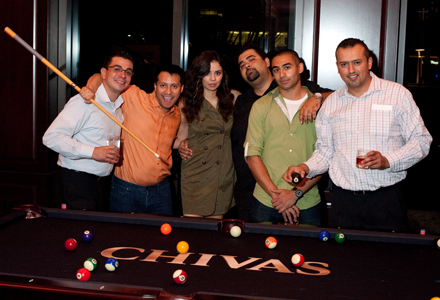 For the months of October and November, the folks at Chivas, a division of Pernod Ricard beverages, are deploying six 1801 Clubs in two phases to treat its new band of brothers like the high-class gentlemen they are. The brand launched the Chivas Brotherhood this year to entice men of the affluent, stylish, young-ish and cool demographic to try the premium blended Scotch whisky in its 12-, 18- or (if they’re really savvy), 25-year varieties. The clubs present as pop-ups and are running in Chicago, Houston and Miami throughout October, and will redeploy as phase two in Dallas, Los Angeles and New York City in November.

Throughout the course of the month, in each market, the brand will host media nights, partnership events with local style brands, distributors and other strategically smart partners and open nights to attract new members into the Brotherhood. Each Club is housed in a special, exclusive location in a classically high-style part of the city. In Chicago, it’s in the West Loop, in Los Angeles, it’ll be in Bel Air and in New York City, the West Village. Though each has it’s own feel and ambiance, they have some things in common. The bar (for drinks), the game room (for pool and poker), the relaxation room (for watching a movie or sports) and the tasting room (for guided Chivas tastings) are the common areas. Also, there are specialty elements, like a putting green or cigar rolling station.

In total, the idea is to help the men of the Brotherhood get a sense of the brand, live and in person. It’s all about drinking in the spirit of the spirit, while, of course, sipping the spirit itself. Most members are registered in advance, through the Brotherhood website, where they can get a look at the schedule of 1801 Club events and RSVP to event nights. If a non-brother shows up, they are invited to join at the check-in station, which they can do on an iPad before heading in to take advantage of the heady vapors of sophistication.

“We’re integrating the Brotherhood into everything we do,” JC Iglesias, director of marketing for scotch, whiskey and cognac at Pernod Ricard, told Buzz. “Men come to blended scotch in search of an experience. The Chivas Brotherhood, and 1801 Clubs, are all about creating that experience for them.” Agency: Legacy Marketing Partners, Chicago.