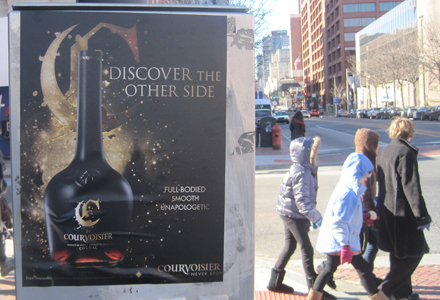 To raise awareness for C by Courvoisier, a new offering by the cognac brand that will hit retail shelves this month, Courvoisier in January launched a guerrilla marketing campaign that includes three components—wild postings, stenciling and mobile projections. The effort will roll out in nine markets and continue through mid-March.

C by Courvoisier is produced in small batches from the grapes of 50 winegrowers in the Fin Bois Cru region of France and offers an intense, bold flavor.

“C by Courvoisier explores the other side of cognac, so we want to execute a non-traditional marketing campaign that embodies the bold, revolutionary spirit of not only our new product, but also of the Courvoisier brand,” Mallika Monteiro, brand manager at Courvoisier, told Buzz. “Our goal for the C by Courvoisier campaign is to visually convey how the product stands out from the crowd and showcases a new side of the brand, and we think the tactics used exemplify these traits perfectly.”