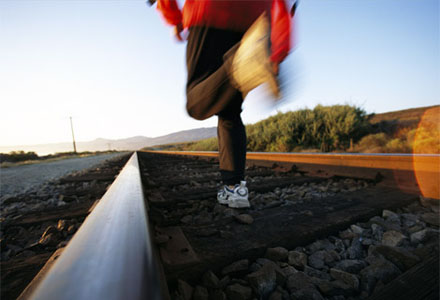 Today, New Balance opens its first North American Experience store in the Flatiron district of New York City and to get the buzz building and peeps through the doors, for the next four weeks the brand is challenging runners throughout the five boroughs to race for the chance to win free shoes, gift cards and, for the grand prize winner, a solid gold New Balance Baton worth $20,000.

The mobile game, called Urban Dash, is available for iPhone from the Apple app store and at newbalance.com/ny. Once on players’ phones, the app uses GPS to show the user’s position in relationship to virtual “batons” dropped all over the city. To pick up the baton, the runner has to get within 100 feet of it, where the app automatically recognizes the baton and “picks it up,” and then run like mad to get to the new store before another player steals it. For the steal, players can get within 100 feet of another player, allowing the app to “steal” the baton, and take off. Once someone makes it back to the store with a baton intact on the phone and in his or her virtual possession, they win a pair of exclusive 574 NY New Balance shoes. Then the brand will invite them to go back out there and get another baton. For the second through sixth batons, a player will get a $75 gift card for each one. Finally, the one runner who collects the most batons by the end of the contest will win the Golden Baton. Nice. For some social media buzz, the brand is inviting participants and fans to tweet their race progress with the hashtag #nbnydash and post pics and updates to facebook.com/newbalance.

“We’re trying to create an experience that combines our brand heritage in running with mobile technology to get people involved with us via this virtual race,” Tracy Knauer, channel marketing manager at New Balance, told Buzz. “The Urban Dash ties so nicely with our brand DNA. We’re trying to bring our track and field experience to the streets of New York City to drive people into our new store.” Agency: OgilvyAction, New York City.