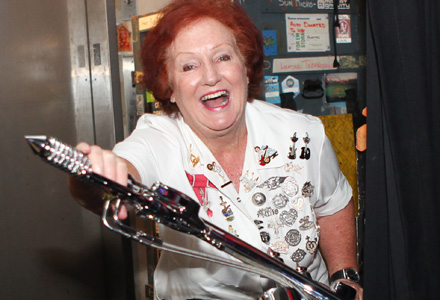 It’s been 40 years since the first Hard Rock Café opened its doors, and to celebrate its birthday the iconic restaurant chain threw a global party called 40 Days that Rock and hit the road with dozens of rock and roll treasures on the Hard Rock 40th Anniversary Memorabilia Tour. The 40 Days that Rock event was a celebration of the past and future of the chain at its 163 locations all over the world and included a global battle of the bands competition in search of the next big rock band. Thousands of fans voted online after hundreds of events to choose Rosco Bandana of Hard Rock Cafe Biloxi, Stefany June of Hard Rock Cafe Cologne, Gugun Blues Shelter of Hard Rock Cafe Jakarta and IAMWE of Hard Rock Cafe Phoenix, all of which joined the lineup this June at the Hard Rock Calling 2011 concert in London’s Hyde Park alongside The Killers, Bon Jovi and Rod Stewart.

Now on the road is the Hard Rock 40th Anniversary Memorabilia Tour, which features 40 of the brand’s coolest pieces of rock and roll history in a 43-foot trailer, starting with its first piece, one of Eric Clapton’s guitars, and including the wedding dress Madonna wore on the cover of her “Like a Virgin” album, Michael Jackson’s jacket from the video “Beat It” and Janis Joplin’s Poncho from the cover of Pearl, alongside 36 other pieces from its 76,000 item collection. Fans worldwide voted for their favorite pieces to be featured on the tour, which kicked off on May 18th and will hit 31 locations in the U.S. before it wraps on Aug. 21. So far, the tour is averaging about 1,000 visitors, proving that Hard Rock still knows how to rock out after all these years.