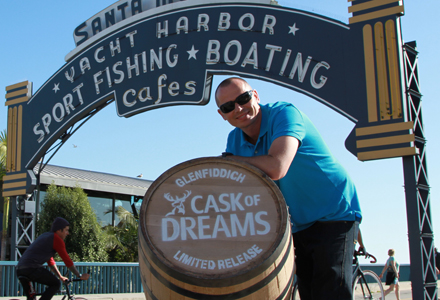 Glenfiddich single malt scotch whisky, distilled by William Grant & Sons in the UK, has begun its Cask of Dreams campaign, a new live and online program designed to help fans pursue their dreams. The program, which kicked off April 5 in Los Angeles, consists of a mobile tour to 12 major U.S. markets throughout the month of April with Scotch whisky experts and official Glenfiddich brand ambassadors Heather Greene, Freddy May and Mitch Bechard. In each market, these three will roll casks through the streets, encouraging passersby to write their secret aspirations on the casks, which will be used to age a special limited edition of the whisky. The special Glenfiddich will be sold in the U.S. in early 2012. Each person who signs the cask with a dream or goal will be entered in a contest to win a trip to make that dream come true. The tour has already stopped in Houston and will tour the entire U.S. before the finale in New York City’s Times Square.

“This is the result of looking at the brand and its history of pioneering and the way we’ve grown to be the world’s leading single malt whisky,” Caspar MacRae, category marketing director at William Grant & Sons, told Buzz. “What’s really important about the campaign is that it explains to consumers why we can claim that spirit of being a pioneer. It brings the production process to people’s locales, so they can get physically involved in what will be an exceptional whisky.”

The tour dates are available online at caskofdreams.com. Fans can submit dreams on that website, too. As part of it’s relationship with its charity partner, the National Geographic Explorer’s Program, the brand will donate $1 for each person who shares a dream online. Agency: Momentum Worldwide, London.