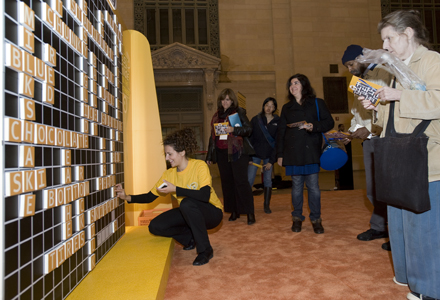 To put its latest Easy-Glide System pens in people’s hands, BIC created an interactive experience at high-traffic train stations and malls from Nov. 10 to Dec. 3. The program kicked off at Grand Central Terminal in New York City where the brand put up a giant eight-foot by 12-foot crossword puzzle that could be solved using magnetic letters. Commuters could also play a sensory game involving three spheres that contained different textures, including a piece of silk and a smooth rock, that tied back to the smoothness of the BIC pens. Consumers could also learn more about how each pen is made in a video gallery that explained the manufacturing process. People walked away with a pen, a crossword puzzle and a sticky pad on which to test out the pen, as well as a coupon to drive consumers to stores.

“More than just basic sampling, we wanted an experience that would provide talk value,” Joe Franzino, senior brand manager stationery at BIC, told Buzz. “It was also critical that they had to write with the pen so they could understand the smoothness for themselves.”

The Grand Central event was followed by two more train station experiences at Boston’s South Station and Chicago’s Union Station. The last two stops were at the Mall of America in Minnesota and Westlake Center in Seattle. Agency: Eventive Marketing, New York City.