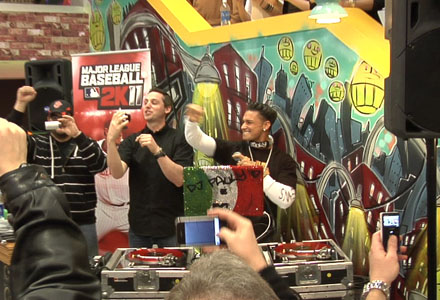 2K Sports, the maker of the Major League Baseball 2K11 simulation-based video game, on baseball’s Opening Day launched the $1 Million Perfect Game Challenge, a contest in which gamers try to pitch a perfect game using the latest edition of the MLB 2K series. The launch event took place at the MLB FanCave in New York City where attendees, beginning at 12:01 p.m., could test their gaming skills at one of four pick-up-and-play PS3 kiosks.

Last year’s million-dollar winner, 24-year-old Wade McGilberry, who now serves as a spokesperson for 2K Sports, was on hand at the event, which took place until 5 p.m. MLB players Jobba Chamberlain, Goose Gossage and others appeared throughout the day. A VIP event at the FanCave that evening celebrated Opening Day and the launch of the challenge. Celebrity dj Pauly D from “Jersey Shore” also made an appearance.

MLB FanCave is a season-long promotion in which two super fans, one rooting for the Yankees and another for the Baltimore Orioles, will watch all 2,454 games of the season in a 15,000-square-foot space tricked out with a comfortable couch, a wall of 15 Sony TV screens, a performance window, a music area and dj booth and a personal style section with a barber chair and tattoo artists. The FanCave was designed by Paul DiMeo, a lead designer of ABC’s “Extreme MakeOver: Home Edition.”

This season’s MLB 2K11 game launched at retail on March 8, giving fans three weeks to practice for the perfect game challenge, which runs from April 1 until 11:59:59, Sept. 28. Participants submit videotapes to verify their perfect game.

“The perfect pitch challenge is our way of giving back to the fans, a fun, simple way to try and enjoy MLB 2K11 with no strings attached,” Jason Argent, vp-marketing at 2K Sports, told Buzz. “We know once baseball fans try it, they will love it, and it is a great way to bring mainstream attention to the game.”