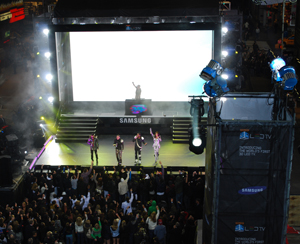 Samsung unveiled its first-ever 3D LED TV to passersby in Times Square at a surprise concert event featuring the Black Eyed Peas on March 10. The brand skipped traditional pre-promotions and instead relied on consumers in and around Times Square to generate buzz for the “impromptu” event with their handhelds and cell phones. The gamble worked, resulting in 2.4 billion media impressions.

Leading up to the main event, a team of 18 b-boys (break dancers, some featured in this year’s Oscars broadcast) traveled the city in four branded double-decker buses, stopping at hotspots like Grand Central Terminal and Madison Square Park where they placed break dancing mats designed to resemble life-size TVs on the ground and performed dance routines. Once captured on film, the dancers appeared to be popping out of the TV screens, just like a 3D image. In the meantime, a stage was being built in the middle of Times Square, creating a sense of intrigue. Samsung took over five billboards, including the Nasdaq and Reuters screens that, 30 minutes before the event, switched from Samsung content on a loop to a countdown. At 7 p.m., an emcee kicked off the experience and brought up James Cameron, director of the 3D hit movie “Avatar,” to welcome the crowd. Next up, a 15-minute concert by the Black Eyed Peas, which Cameron’s crew filmed in 3D and aired live on the billboards.

“Samsung’s global launch event in New York allowed us to get closer to the general public and share the exciting experience and moment together by announcing the coming of the 3D TV with the world’s best performers, like the Black Eyed Peas,” Sonia Kim, senior manager-marketing communications, visual display division at Samsung, told Buzz.

The event concluded with a VIP after-party at the Samsung Experience inside the Time Warner Center. In attendance were Cameron and other celebrities, like Hillary Duff and Donald Trump, with additional entertainment by the Black Eyed Peas. Footage of the band’s U.S. tour was aired for the first time in 3D and models wearing 3D glasses strutted down a catwalk in the center of the space. Agencies: Jack Morton Worldwide, Boston; Weber Shandwick Worldwide, New York City; CHI, New York City; Digitas, New York City; Starcom, New York City.