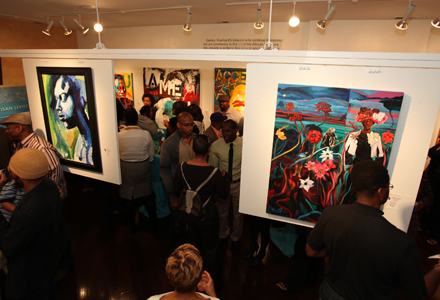 In a new partnership with the Rush Philanthropic Arts Foundation and Complex Media, Bombay Sapphire this year is sponsoring a search for the next great urban multimedia artist and photographer through the Bombay Sapphire Artisan Series. The program kicked off in June and will conclude next year with a showing by the two grand prizewinners at the Rush Arts Gallery in New York City during the month of February. The kick-off event was at the star-studded Art for Life gala, sponsored by Bombay and hosted by Russell Simmons, one of the founders of the Rush Foundation, at his East Hampton estate. There, celebs sipped on custom Bombay Sapphire cocktails while enjoying the VIP scene.

To enter the contest, more than 1,500 artists submitted their work online at complex.com/sapphireart, juxtapoz.com and 12ozprophet.com. A panel of experts, including Mark Ecko of Complex, judged the entries and chose the artists that would compete in the regional events in Atlanta, Chicago, Dallas, Detroit, Houston, New York and Washington D.C. Two winners from each regional event will travel to Miami for Art Basel in December, where the 20 finalists will compete for the grand prize show in New York City.

“It was primarily aimed at the African-American, urban elite consumer and we’ve done a number of events around the program to support local artists,” Richard McLeod, brand manager at Bombay Sapphire, told Buzz. “We have a strong presence in the arts, so that in itself attracts a slightly older consumer who is definitely a premium consumer. We always try with our programs to elevate what it is we’re doing. We’ve found a way to intersect with that consumer market in a credible way.” Agency: commonground, Chicago.