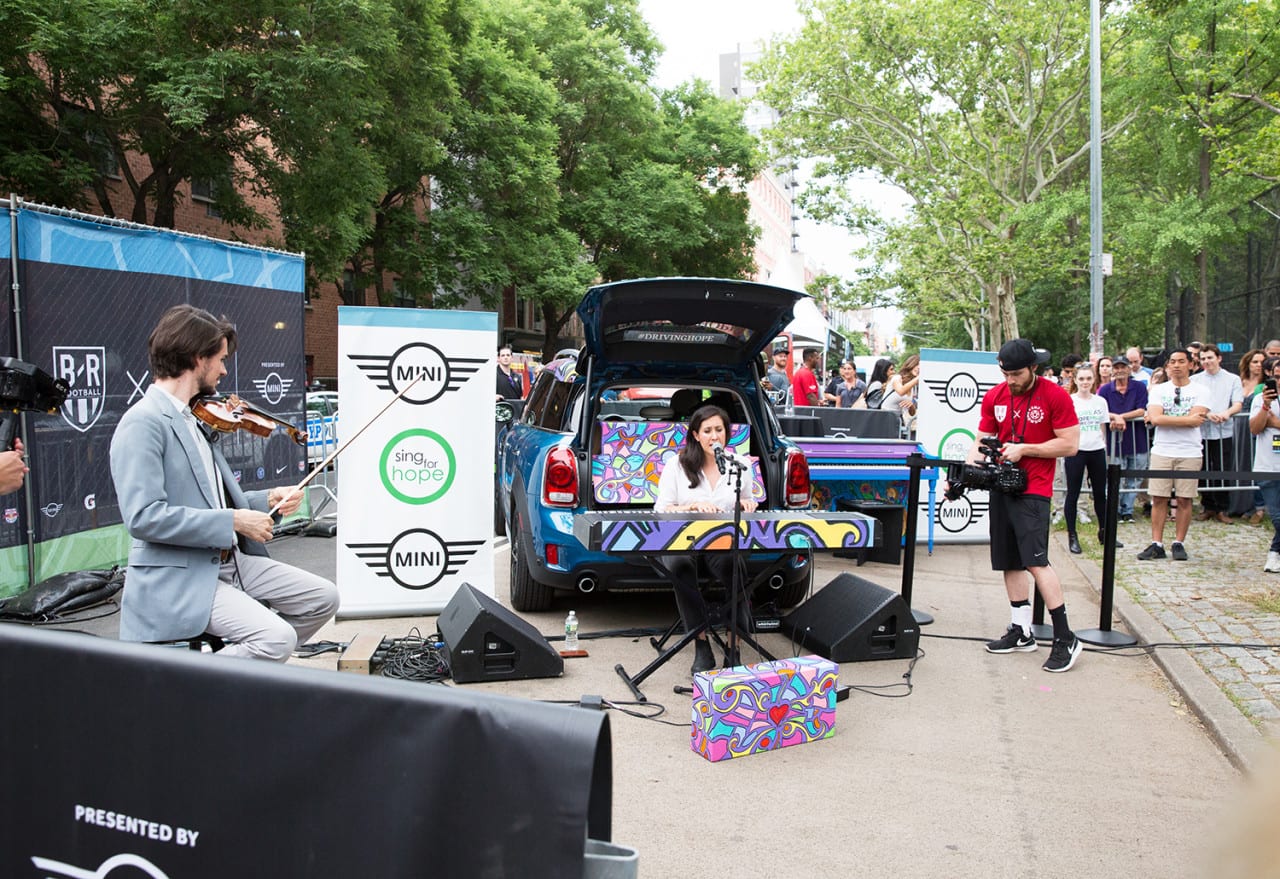 MINI Creates ‘Mini Extensions’ on an Annual Fundraiser with a Tour, Sponsorship

In the experiential marketing world, summer is mobile tour season. And while many brands are hitting the open road on journeys across the country, MINI in June took a decidedly hyper-local approach to a mobile tour as part of a cause-marketing program benefiting New York City’s Sing For Hope and its annual fundraiser for arts and music programs in the city’s public schools. On top of the mobile program, MINI helped amplify the program by elevating a nonprofit soccer match with, what else, but the gift of music. More on that in a minute.

From June 4-24, Sing For Hope placed 50 colorfully painted pianos in public spaces throughout all five boroughs, designed to invite passersby to pull up a bench and play—and create share-worthy moments in the process. Each piano was designed by artists and celebrities, and at the end of the program, the pianos were refurbished and donated to the schools. MINI helped spread the word by creating a 51st piano that sat in the back of a MINI Countryman and traveled the five boroughs, activating impromptu concerts and spreading music like a “traveling music box.”

The campaign, dubbed #DrivingHope, “Allowed music and arts to go to more people, in even more of the city,” says Lee Nadler, metro marketing manager at MINI USA. “The MINI piano was able to reach people in the streets with pop-up concerts going to pretty amazing situations where we could really bring positivity and creativity to New Yorkers,” he says.

The roving MINI, with a 64-key folding piano and custom sound system, traveled to the Dumbo neighborhood of Brooklyn, NY, to entertain people waiting on line to purchase lunch from food trucks. There, unsuspecting New Yorkers enjoyed a concert from pop musician Matthew Maimone. The MINI also surprised a firehouse with a concert for a group of unsung heroes, parked at a block party in the Bronx, and visited the Brooklyn Public Library in Grand Army Plaza for a concert with rock and pop musicians J Mascis and Jukebox the Ghost.

Toward the end of the three weeks, #DrivingHope appeared at the annual Bleacher Report and Steve Nash Foundation Showdown event at New York City’s Sara D. Roosevelt Park on June 20, which MINI sponsored this year. The showdown, which is a charity soccer match benefitting children in underserved communities featuring professional soccer and NBA players, included a first-ever halftime performance presented by MINI with the Harlem Gospel Choir. The match culminated with pop star Vanessa Carlton singing and playing her hit track “A Thousand Miles” on the MINI’s piano to a crowd of onlookers just outside the pitch.

“This is a wonderful program to bring creativity to communities and also to support the arts for kids,” Nadler says. “It tied in beautifully with the [Steve] Nash Foundation, which MINI wanted to assist by bringing in live music for the first time in the showdown’s 11-year history.”

While the pianos have been donated (MINI assisted in delivering them), there will be additional stop-offs for the MINI piano, including possible artist performances at the schools to which the pianos are going, amplifying this once summer-based fundraiser year-round.