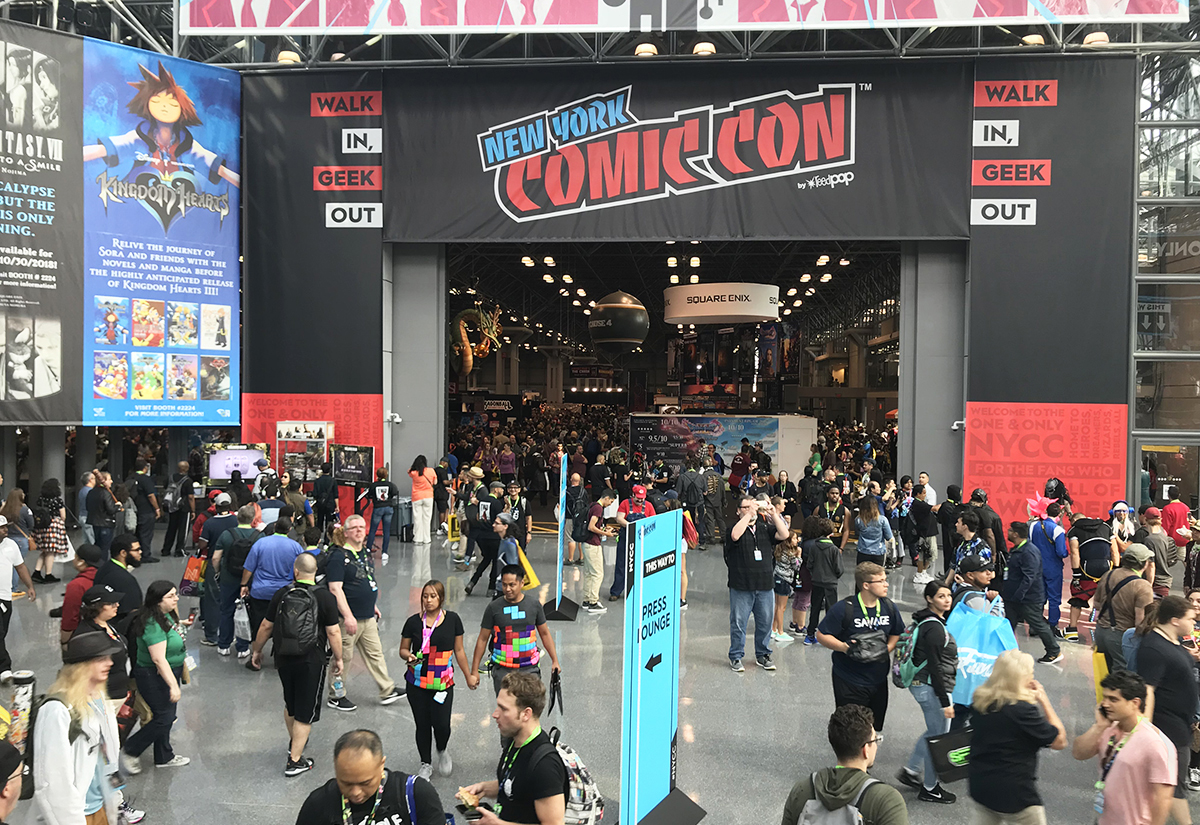 More than 250,000 people descended upon New York City for New York Comic Con, which took over the Big Apple Oct. 4-7. While the heart of the event took place within the Jacob K. Javits Convention Center, ancillary events like panels that used to fuel hours-long lines around the center were moved to strategic locations like The Hulu Theater at Madison Square Garden (ReedPOP, Norwalk, CT, handles the convention).

Amid the seas of book signings, photo ops, gameplay, cosplay, anime and more at the convention center, brands went heavy on experiential to engage fans, new and old, in their franchises. Here’s what stood out. 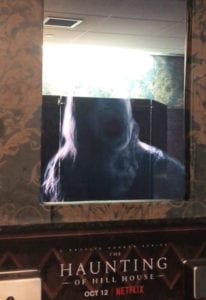 Tucked away at the back of the Javits Center was an unexpected experience Netflix activated for its new thriller series “The Haunting of Hill House.” The gender-neutral space was wrapped in creepy, vintage wallpaper, faux woodwork and tiling, all resembling the set of the series, as well as “The Haunting” branding. The live-wired mirror was covered in an augmented reality mirror build-out. When an attendee walked up to the sink or paper towel dispenser, they triggered the experience: the lights flickered and a lady ghost with a bent neck would be appear in the mirror. She appeared to come closer to the screen and then—she screamed—with the experience ending with a quick branding message. Makes you want to peek under the stalls to make sure you are indeed alone, doesn’t it? Agency: Rapport.

If you were a teenager of the ’80s, then you remember the cult-classic film “Heathers,” about a brutal clique of high school girls. As Paramount Network is set to release a modern-day adaptation of the original dark comedy, the brand invited fans to enter the world of the show’s base, Westerburg High, for an interactive photo op and a “killer” sneak peek into the series, which premieres on Oct. 25.

The brand parked a 30-foot-long yellow school bus in the Javits Center, which was covered in graffiti and iconic taglines from the franchise. Inside, fans climbed in for a photo op with bloodied graffiti along the ceiling, neon signs from the show and a vibrant disco ball. A flat screen played eye-grabbing content from the series.

The best part, however, were the brand ambassadors dressed in original “Heathers” costumes and in full character, dishing out story insults to one another and helping consumers find their “best light” for photos. Fans tagged their photos with #Heathers and walked away with swag—and plenty of dramatic eye-rolls from the BAs. Agency: Civic Entertainment Group. 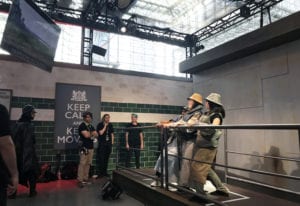 We may be a little jaded. We have posed for quite a few photo activations in our time. But this green-screen video activation for the upcoming Universal Pictures sci-fi film “Mortal Engines” has revived our attention on these mainstay experiential engagements. Attendees lined up for what would be a mini film shoot, complete with costumes, props, a director and video editor. We entered through the right side of the booth into a queue-line where a staffer scanned our badges (Thuzi handled) to link the video to our profiles. Then, a costume “designer” handed us our props—big, floppy hats, stained linen robes. We stepped up onto a faux balcony with a metal railing. A big screen across the way played the scene in which we would participate. Then, the director fed us our “lines” and told us how to react (in fear) and where to move our bodies. Then, the wind picked up, fake smoke hovered around us, and we screamed and dipped as the “enemy”—the city of London, a giant, predator city on wheels in this post-civilization world—lodged weapons at us. Afterward, we stepped off into the exit line and to a video booth, where two editors were busy editing and splicing our footage together. Then, we watched our mini film. While the line for us wasn’t long, if it was for others, we’d say it was… #worthit. Agency: Darkburn.

Check out fans in action:

Count this under the #worthit category. Outside the Javits Center near the entrance where ticketholders came in was a large log cabin for Starz’ promotion of the new season of “Outlander.” Waiting in the 20-minute line on Thursday, brand ambassadors chatted up attendees, talked “Outlander” and invited them to download the Starz app in order to enter the lodge and receive the goodies inside. The line wrapped around the lodge, giving us ample time to chat with other attendees, enjoy an E! donut (more on that in a moment) and take in the fragrant, woodsy smells the lodge structure’s rough pine build gave off. Once we stepped up onto the front porch of the experience, we reached into a bag held by a staffer to try to pull a card that would award us a free autograph signing with the stars that Saturday. (No dice.)

The interior of the cabin was decorated top to bottom with 18th century period décor, like woven baskets, looms, candle sticks, lavender sprigs and a wood stove. Our first stop was at an apothecary station to select one of three scents by real U.S. fragrance company Caswell-Massey, which has been in business since 1752. Attendees could choose a one-ounce bottle of one of either: Number Six, America’s “first fragrance” and one worn by President George Washington at is inauguration; Rose-Water, or Sandalwood. Next, was a Leather Works station by New York-based Royce, where we watched the time-honored craft of monogramming on a custom leather luggage tag. Attendees walked away with a luggage tag embossed in their gold initials with the imprint of “Starz” and “Outlander” on one side. Before leaving, we received an “Outlander” branded canvas tote to hold our supplies. Talk about some decent swag. Agency: Civic Entertainment Group. 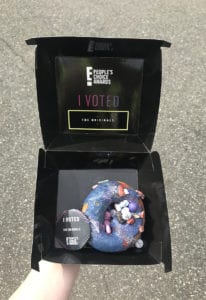 No, you don’t always need an intricate activation to score with the Comic Con crowd. Sometimes, a free donut is all it takes. E!, promoting the People’s Choice Awards, turned the category of Best Sci-Fi/Fantasy Show over to the attendees at New York Comic Con. Attendees walked up to the branded Airstream trailer parked outside next to the “Outlander” activation, selected the show they like best, and then stepped up to the trailer to receive a donut placed in a branded box that offered flavors and edible decorations matching the theme of that show. Next to the donut was a pin (pins are big at comic-cons) that said “I Voted” with E! branding and the show title. We chose “The Originals,” which resulted in a vanilla donut with swirled blue and purple icing, edible glitter, candy rocks, and show-branded M&M’s. Tasty. Agency: TH Productions.

Chevrolet kept the photo activation momentum for us going by offering fans multiple photo ops in addition to gameplay. First, the brand parked a pink (October) Breast Cancer Awareness Month-branded Camaro in the Javits for consumers to pose with. For every photo of the pink Camaro tagged with #IDRIVEFOR to Instagram or Twitter, the brand pledged to donate $5 to the American Cancer Society. We like it. The next photo up was with a Spider-Man branded Chevy Tahoe, complete with a 3D cutout New York City backdrop to pose next to, and floor-to-nearly-ceiling skyscraper hanging backdrops. Fans also lined up for Chevrolet’s video game tournament featuring Street Fighter, where a daily winner won a gift card and all players walked away with a branded t-shirt. Agency: Jack Morton Worldwide. 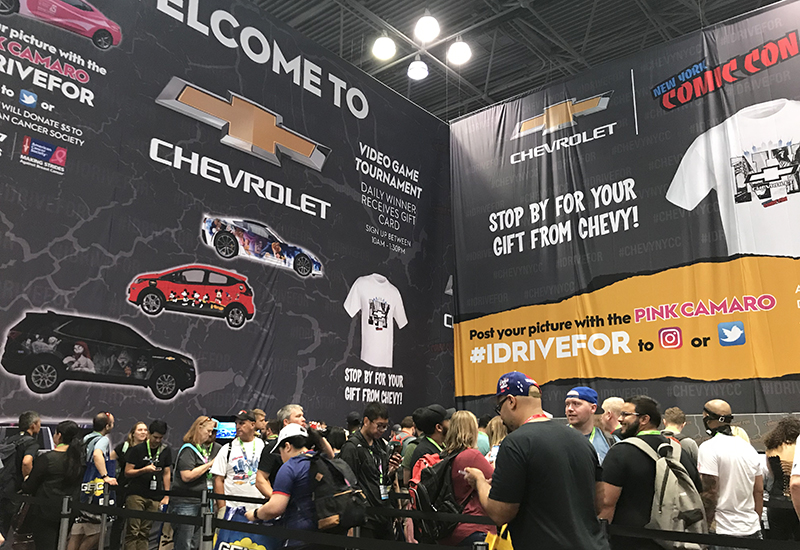