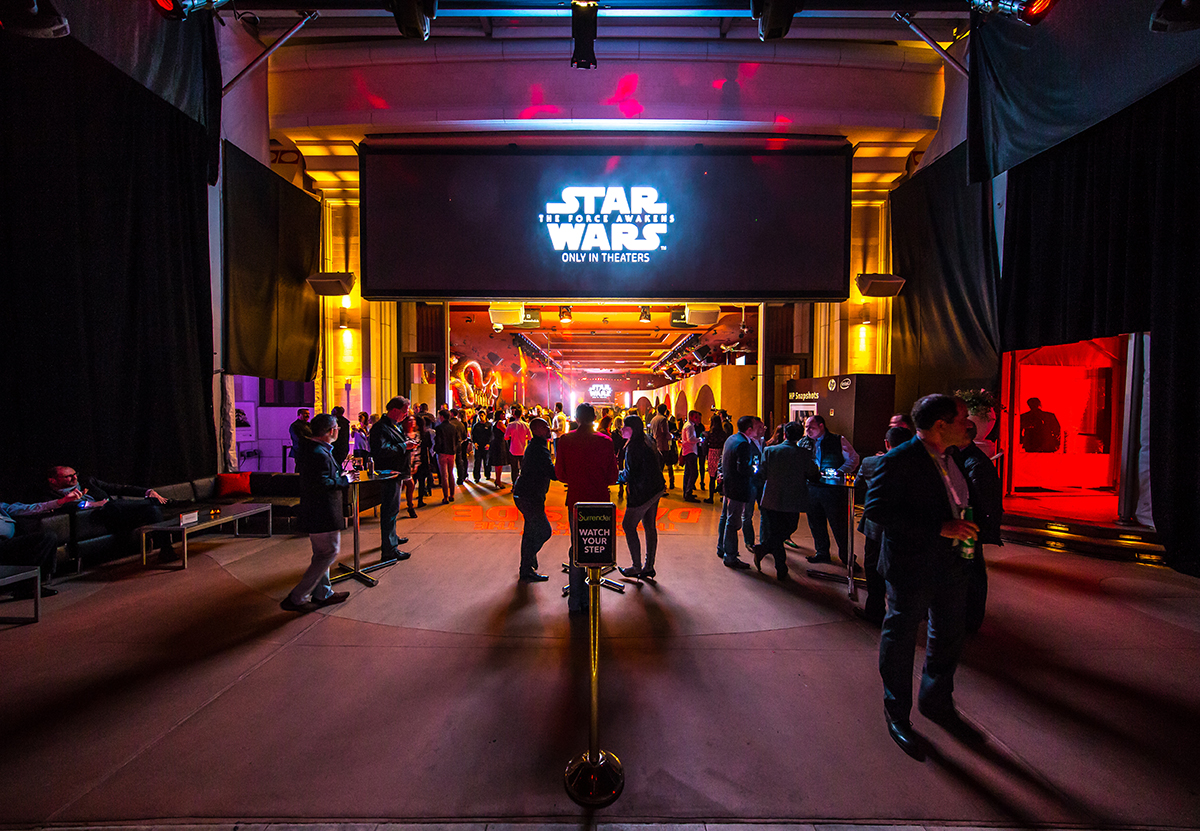 HP and Intel transformed Surrender nightclub in Las Vegas into an immersive “Star Wars” event during CES 2016 that incorporated its products and celebrated HP’s partnership with Disney and the epic franchise. Retail and channel partners, and VIP customers attended the event on Jan. 7 headlined by DJ Kaskade a few weeks after the much anticipated release of “Star Wars: The Force Awakens.” About 40 lucky fans attended, too, the result of a call-to-action campaign by the dj on Twitter.

On arrival, attendees entered through a meet-and-greet area designed to look like the movie’s Mos Eisley Cantina, and offered HP’s newest products on display including the special edition Star Wars HP notebook. The theme carried throughout the venue and, at every turn, roving characters from Storm Troopers to R2-D2s and X-Wing fighter pilots offered constant photo ops while Jedi’s passed cocktails.

Attendees wore glowing RFID wristbands that changed color to match whatever experience they walked through in the venue from, appropriately, the Dark Side to the Light Side. Among activations was an interactive digital graffiti wall using HP and Intel products, where attendees could create digital masterpieces that were also displayed on the main stage area prior to Kaskade’s performance. Attendees could peruse Disney’s globally renowned “Art Wars” gallery collection of Storm Trooper helmets transformed with materials ranging from Swarovski crystals to swamp mud and sticks.

At an animated GIF station, attendees held an actual light saber and posed against a green-screen backdrop. The result: their image fully immersed in a “Star Wars” scene of their choice, with the light saber appearing to shoot up and down in a shareable animated file. For an activation highlighting HP’s Sprout 3D scanning desktop suite, attendees projected patterns onto Storm Trooper helmets, designing their own custom souvenirs.

Rock formations, structures resembling sets from the movie and the Imperial logos and flags adorned the main stage area where Kaskade performed. Down in front, two animators rendered 3D graphics in real-time using HP solutions powered by Intel’s processor technology from a command station that appeared onscreen behind the dj booth.

Outside, the pool area was transformed into an X-Wing crash scene, a remaking of the crash site at Yoda’s Dagobah, complete with mist and swamp grass. (They literally built a 40-foot X-Wing replica. Nice.)

The event followed a music video release event in November surrounding HP’s Awaken Your Force global campaign and contest (#AwakenYourForce) inviting consumers to get creative with their passion for “Star Wars.” HP and Intel traditionally host an event together at CES. This year, HP reported double the amount of RSVPs with a few thousand in attendance.

“We want experiences that people can do and take and feel and share,” says Alyson Griffin, vp of Marketing Americas Personal Systems at HP. “We wanted people to have fun and engage with our products, be creative, which is what the Awaken Your Force campaign was all about. We were able to do this in an engaging way that felt authentic.” Agency: Infinity Marketing Team, Los Angeles.

Gallery: HP and Intel Awaken the Force at CES 2016