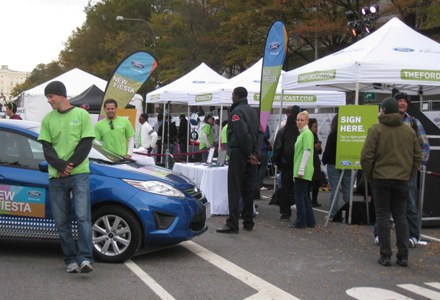 Ford Fiesta on Oct. 30 hosted a pre-party for 2,000 attendees of Red Bull’s Soundclash, a battle of the bands held on Washington D.C.’s Pennsylvania Avenue, in front of the Capitol Building, that pitted rapper Wale against indie rock band Tokyo Police Club.

“We were happy to partner with Red Bull because their target demo and ours is so closely aligned,” Amy Green, sales and marketing specialist, East market area at Ford, told Buzz. The fact that the Ford Fiesta has an energy drink holder that accommodates the Red Bull can isn’t too shabby either.

Six Fiestas located at two nearby Metro stops shuttled attendees to the “Fiesta with Fiesta” pre-party where they engaged in rock music-themed activations, including Rock Band and DJ Hero for Xbox challenges. At a flipbook station attendees could create a seven-second video dressed up as a rock band, then print the footage onto a series of photos that became a flipbook they could take home or share digitally via Facebook. They also could incorporate props such as blow-up guitars, microphones and wigs into a photo op before a custom Ford Fiesta/Red Bull backdrop, then share the photos via @Fiesta_DC on Twitter. Attendees also could share jpg files of digital graffiti made of the same colors as the Fiesta, an activity that ties in with the custom graphic package, or “tattoos,” available on the car.

“The whole point was to start a relationship with Ford and to start to build the awareness with a younger demographic,” Green said. “It was a great way to get that young audience together and to celebrate how you can express your personality through music and through our vehicles by choosing the different tattoos, the colors and the options, and to highlight how young and vibrant the Fiesta is.” Agency: Mr Youth, New York City.